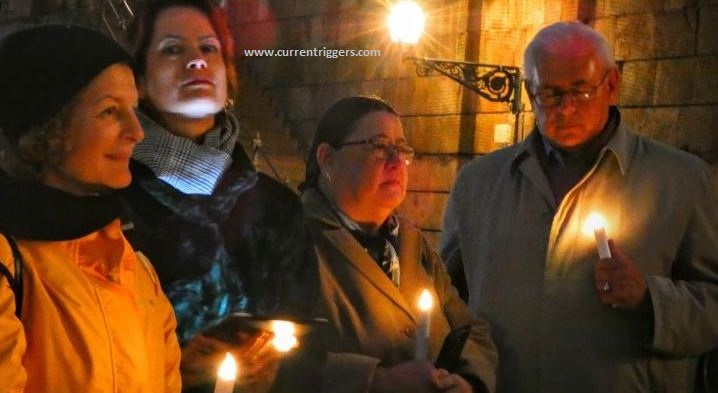 Hindu community in Sweden recently stole the limelight after it celebrated the Diwali Festival in Stockholm in front of the Parliament of Sweden on 9th November 2018.

HFS is an umbrella organization of Hindu Forum Europe (HFE). The aim of the HFE is to:

HFS is working towards the aim of HFE by representing ten Hindu organizations at Swedish level.

The first-ever organized and large-scale Diwali celebration in Sweden at Mynttorget saw the participation of smiling politicians and representatives of inter-religious groups.

Dr. Roland Dahlman of the Consul General of Nepal joined in the festivities.

The Indian Embassy was represented at the Diwali event by Suresh Kumar, first secretary Culture, Consulate.

Hindus in Sweden are a minority community. The support, especially of Sweden’s politicians, is likely to help them become even more visible.

Chitra Paul who is spearheading her campaign to make Hindus more visible in Sweden spoke to www.currentriggers.com. She said it was great that senior political figures of Swedish society saw the merit in her efforts and joined forces with the Hindu community. She hailed the program as a landmark event for the community.

Hindu Priests also thronged the venue of Diwali celebration from all across Sweden. The Hindu Mandir Society (Helenelund) sent Swami Nirdosha while Aashish Sharma and Divendu Ganguli from Bangiya  Sanatan Samaj also gave their support to the event.

Mantras were chanted by the assembled Priests, members of Bangiya Sanatan Samaj, people from the ISKCON, and Veenu Soni, the Yoga and Indian Culture Teacher from the Indian Embassy also joined in.

Dr Åke Göransson from the Head of Administration of the Support for Religious Organizations Authority felt delighted to be at the Diwali gathering. He said:

“I felt honored to be part of Historic Diwali Event and thanks to the organizers who took such a meaningful event. Thanks to you for holding this lamp, which we needed in this cold and dark society. Happy Diwali.”

The support, Chitra Paul hopes, especially of Sweden’s politicians and interreligious groups, is likely to help the Hindus become visible, and also give them the much-cherished acknowledgment for their efforts and contributions towards religious peace and harmony.

She also believes that the message of Diwali; “victory of light over darkness, good over evil and knowledge over ignorance,” will strengthen the spirit of togetherness and enhance peace and joy in the multicultural , ‘open’ and ‘accepting’ Swedish society.

The event was closed by Chitra Paul and Pran Malhotra and Prasadam (sweets) were distributed by the ISKCON. The groups have vowed to hold this event again to spread light, happiness, and cheers.