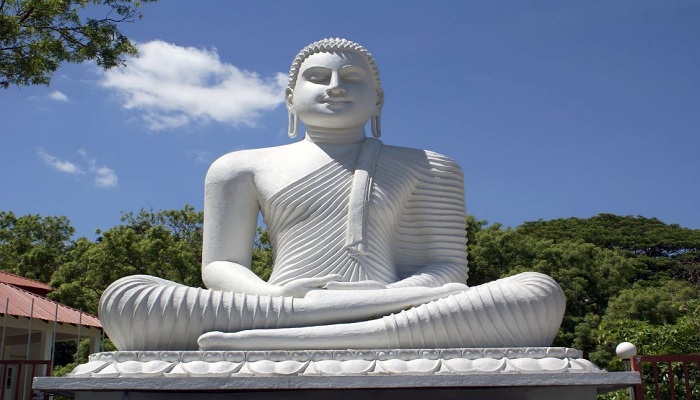 Buddha statues erection in the Hindu and Christian dominated northern province of Sri Lanka has evoked controversy with Chief Minister of Northern province, C.V.Wigneswaran, coming out to clarify that the issue is illegal erection of Buddha statues and the building of Buddha Viharas without taking into account the number of worshippers which would need the place and the local laws which have been flouted. He specifically said that such installments should be done in areas where there are Buddhists hinting that the issue was bigger than the installation of Buddha statues.

Chief Minister was responding to allegations of Sri Lankan Justice Minister Wijedasa Rajapakshe’s statement that he and the Northern Provincial Council (NPC) demanded a ban on Buddha statues in this Tamil dominated region where Hindus and Christians are a majority.

Why Buddha statues’ installation is controversial?

Buddha is respected by everyone in Sri Lanka, however, Buddhism is above all religions in this state, therefore, Sri Lanka is not a ‘secular’ state at all.

After the LTTE was wiped out in 2009, Sri Lankan forces and Buddhist Monks have built several illegal Buddhist places of worship and viharas illegally leading to fear that the Tamils would soon be outnumbered by the population invasion Sinhalesenahlese.

In this context, the role of Rajapaksa is also dubious as he is considered close to Sinhalese Buddhist groups which have been charged with communalism and racism campaigns against the Tamils and are said to be behind this controversy as well.

These groups led by Monks are often violent in the pursuance of their demands and have suggested that under President Maithripala Sirisena Buddhism may not enjoy a dominant status. Budhu Bala Sena, Ravana Balaya, and others are major organizations of this type. Allegations of forced conversions have led a new Hindu group Siva Senai to rise to challenge this. But the big question is what will happen now?

Siva Senai a movement of equal rights, must get support of Hindu groups in India