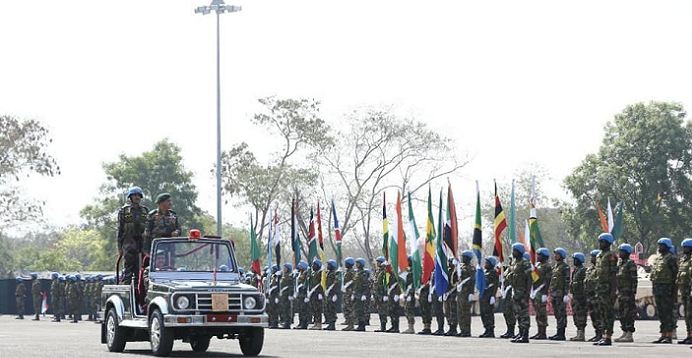 Contingents of the 17 African Nations i.e. Benin, Botswana, Egypt, Ghana, Kenya, Mauritius, Mozambique, Namibia, Niger, Nigeria, Senegal, South Africa, Sudan, Tanzania, Uganda, Zambia and Zimbabwe came together for the opening ceremony along with a contingent of Maratha Light Infantry representing India. Major General Sanjeev Sharma, General Officer Commanding, Golden Katar Division, who was the Chief Guest for the opening ceremony of AFINDEX, reviewed the parade, in presence of a large number of Defence Attaches and other officials of participating nations.

A fly past by a set of Advanced Light Helicopters and Cheetah Helicopter of the Indian Army carrying the flags of United Nations, India, and the AFINDEX was the highlight of the opening ceremony. The Chief Guest and Defence Attaches from various nations interacted with the contingents after the completion of the parade.

The aim of the AFINDEX is to practice the participating nations in planning and conduct of Humanitarian Mine Assistance and Peace Keeping Operations under Chapter VII of United Nations Peace Keeping Operations. The exercise will focus on the exchange of best practices between the participating nations, team building and tactical level operations in conduct of United Nations mandated tasks to include establishment of a new mission, siting of a United Nations Headquarters for Peace Keeping operations, siting of Military Observer sites during the peace keeping missions, protection of civilians, nuances of standing combat deployment, convoy protection, patrolling aspects and aspects related to Humanitarian Mine Assistance.