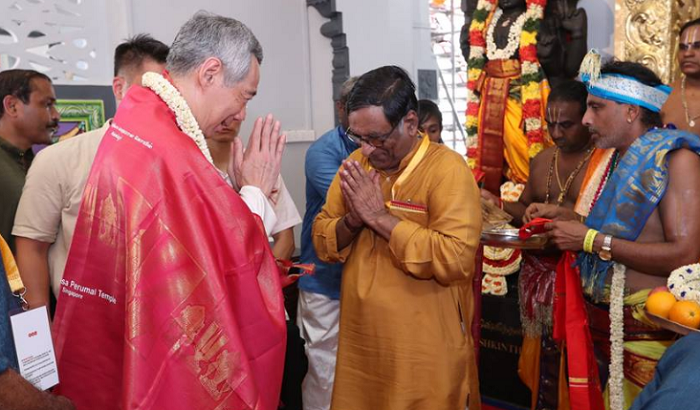 Lee Hsien Loong, the Prime Minister of Singapore led close to 40,000 devotees and four ministers at a 164-year-old Hindu Temple’s reconsecration ceremony yesterday. The Temple was undergoing SGD 4.5 million restoration work.
The water used in the holy ceremony was ought from nine holy rivers in India and brought to Singapore.
Prime Minister was effusive in his praise of the Hindu community and also expressed his happiness:

Happy to join the Hindu Endowments Board (HEB), Hindu Advisory Board, Temple management committee, faith and community leaders and thousands of devotees for the re-consecration ceremony of Sri Srinivasa Perumal Temple this morning. This 164-year-old Temple has been undergoing renovations for the last 1.5 years to prepare for its re-consecration, which takes place every 12 years. This Temple is a landmark for the local Hindu community. Its re-consecration and redevelopment was only possible with generous donations from devotees, the Temple leadership and the Hindu community. Each generation has to look after and enhance what past generations have built in Singapore, and leave Singapore better than they found it.

Diwali themed train in Singapore gets thumbs up from Hindus across the world! (Pics)

He also shared these four pictures and took time to explain the major portions of the Temple ceremony:

Hindus are 5.2% of the total population of Singapore with many with origin in Sri Lanka and India.