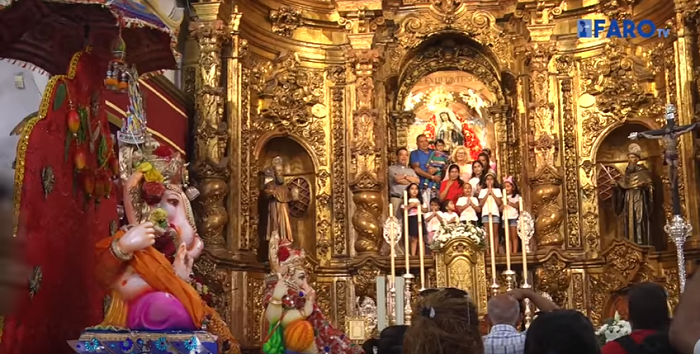 Bishop Rafael Zornoza Boy of the Diocese of Cádiz y Ceuta was forced to issue an apology after a feud erupted over the Hindu God Ganesha’s procession was welcomed inside the Church.

He issued a public apology while a Priest has already resigned.

The problem began when the Lord Ganesha’s procession was being taken out and the Hindu community of Ceuta and Melilla, two autonomous Spanish communities located on the coast of North Africa entered the Catholic Church of Our Lady of Africa. They were welcomed by the diocese’s Vicar General Father Juan José Mateos Castro and amidst chants of Lord Ganesha, they joined others.

The statue of Lord Ganesha was also paraded into the church and brought near the statue of Virgin Mary, which went through the city ending at the sea as a part of his birthday celebrations on August 27. This procession had been making a stop at the church, whose history goes back to 1421, for the last eight years. However, this may be the last time that such a stop was welcomed.

The full statement after translation noted that the acceptance of Hindu God Lord Ganesha inside the Shrine was wrong and should not have been allowed. Bishop wishes to express his deep sorrow for this unfortunate event that has caused damage, confusion or scandal in the Christian community and, as a representative of the Church in Cadiz and Ceuta, he apologizes to all who for this action have been hurt, scandalized or confused in their faith. It recognizes that it has been a mistake to allow the entrance of these images and that it has not at any time intended to venerate anything of our true and only God…Vicario has acknowledged his error, regrets the damage he has been able to cause to the faithful and accepts his total responsibility, presenting his resignation, which has been accepted.

Hindu statesman Rajan Zed took a strong stance over this controversy and has requested Pope Francis to reinstate priest of Parish of Saint Mary of Africa in Ceuta (Spain). He said that broader and more inclusive understanding of religion was needed as no religion was an island. We should learn to see interconnections and interdependencies between religions. God did not have exclusive agents, as many might claim. We needed to attempt to live together in mutual loyalty and trust despite our seriously different beliefs as God positively and a generously willed existence of diverse faiths.

There are around 50, 000 Spanish Hindus in the nation and the Hindu community has also made a federation “Federación Hindú de Españ” to ensure that they are better heard in the country.