Lal Chand Malhi who was recently called an RAW agent and an Indian spy is refusing to let the popular Islamic Cleric, Peer Jaan Sarhandi, get to him.

In a recent statement he said: “no one can cow me down. I will resist to my last breath for minority rights. I respect all religions. ”

He made this statement after concerned netizens came to his defense.

Malhi also pointed to the ruling secular party in Sindh, the PPP (Pakistan People’s Party) for spreading terror among the minority and said: 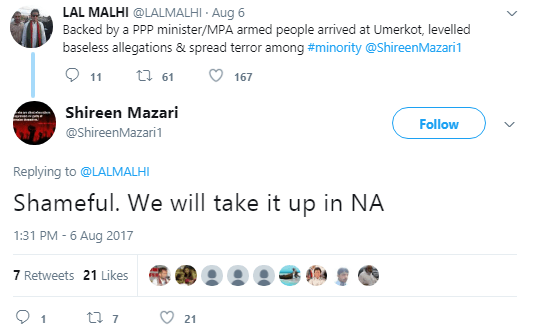 But why is Lal Malhi under the scrutiny of extremists?

Lal Malhi is being targeted as he has taken strong stance against forced conversion of Hindu and other minority girls. Malhi is a Pakistan Tehreek-e-Insaf (PTI) member of the National Assembly on a minority reserved seat and he has been dealing with forced conversion cases for long. Hailing from Umerkot in Sindh, he had earlier said that the forced conversions are going on unabated in the country.

In a report titled ‘More forced conversions going on than reported, says MP’ in the prominent Pakistani newspaper, The Express Tribune, on June 6, 2016, this Hindu lawmaker had told the reporter that that the number of reported forced conversion cases are few as many Hindus are poor. He had said that at least 90 percent of cases actually go unreported and only, sometimes, forced conversion cases of affluent Hindus get some coverage in the Pakistani media.

He also told the reporter:

“Here we are talking about those poor families who either work as bounded labour or earn only one-time meal. These people refrain from going to the police due to obvious reasons.”

Malhi also was quoted by the Pakistani newspaper that when these hapless people contact local landlords, they often face unsympathetic faces as the landlords are not from the Hindu community.

The bold Hindu lawmaker even went ahead and said that even in the case of affluent Hindu families, where some media limelight is there, the police is unable to take action because many times the Hindu girl is discovered in a madrassa (Islamic learning center).

Malhi candidly went on to describe the entire modus operandi in the Pakistani newspaper. He explained the predicament of police in the following words:

“Police keep on pleading the administration of the seminary to grant access to the girl. The process takes days till her captors are satisfied that the girl has been brainwashed or she is under their full influence and would repeat before the police whatever they tell her.”

Malhi added: Afterwards, the abductors ‘allow’ police to record the statement, he told the paper and added that this was done for’setting the tone for the remaining trial. The girl is kept away from her family during the whole episode. When she is brought before the court either she is already brainwashed or she is under pressure. This is the condition under which her statement is taken and the case is decided.

He told the paper that after all this the victim’s family never gets to see their daughter again.

It is therefore natural that Lal Malhi is seen as a threat in Pakistan by radicals and the RAW and the Indian angle seems to be a clever ploy to win popular support. However, exact opposite has happened as these tweets from prominent Pakistanis prove: 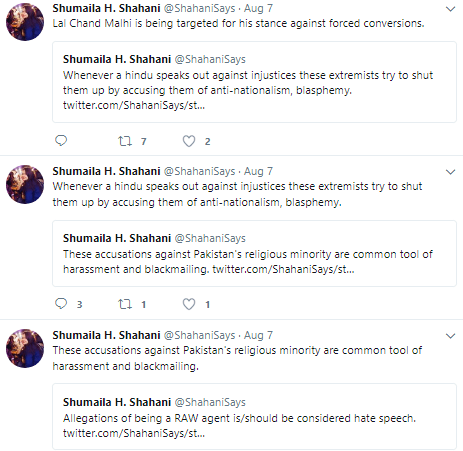 Malhi had, in July this year, submitted an adjournment motion in the Pakistani National Assembly Secretariat on the issue of Pakistani Hindus being referred to as ‘Indians.’

“The business of the house may be adjourned to discuss an urgent matter of public importance regarding the atmosphere being created by the ruling party to imply that minority communities cannot be Pakistanis. Showing continuous disdain towards minorities by the ruling party’s senior leadership in honourable courts and media is a cause for concern among the people of Pakistan in general and minorities in particular.”

The (MQM-P) Central Leader Sanjay Perwani, another lawmaker, had pitched in with Malhi stating that Hinduism is a religion and not a nationality.

An agitated Lal Malhi had earlier also created ripple across the world in 2015 when he lambasted the Pakistani Muslim lawmakers for continuously questioning the patriotism of the minorities and ridiculing Hinduism. He had quipped in rage:

“They (Muslim leaders) want to target India and they target Hindus in Pakistan, what is our fault? Are we not Pakistani citizen?”

His outrage was carried across the world bringing limelight to the plight of Pakistani Hindus. But the serious threat from a popular and prominent cleric with extensive connections can lead to circumstances where he may end up losing his candour. To avoid such a situation, he must be given extensive security.