NITI Aayog has launched an index to rank States and UTs that is based on implementation of seven provisions proposed under model APMC (Agricultural Produce Market Committee) Act, joining eNAM initiative, special treatment to fruits and vegetables for marketing and level of taxes in mandis.

These indicators reveal ease of doing agribusiness as well as opportunities for farmers to benefit from modern trade and commerce and have wider option for sale of her/his produce says NITI Aayog. These indicators also represent competitiveness, efficiency and transparency in agri markets. The second area of reforms included in the NITI Aayog index is relaxation in restrictions related to lease in and lease out agricultural land and change in law to recognise tenant and safeguard land owners liberalisation. The third area included in the index represent freedom given to farmers for felling and transit of trees grown on private land. This represents opportunity to diversify farm business.

The NITI Aayog Index is named as “Agricultural Marketing and Farmer Friendly Reforms Index” and it has a score which can have minimum value “0” implying no reforms and maximum value “100” implying complete reforms in the selected areas.

States and UTs have been ranked in terms of the score of the Niti Aayog index.

The state of Maharashtra achieved first rank in implementation of various reforms. The state has implemented most of the marketing reforms and it offers best environment for doing agribusiness among all the states and UTs. Gujarat ranks second with a score of 71.5 out of 100, closely followed by Rajasthan and Madhya Pradesh. Almost two third states could not reach even halfway mark of reforms score. Major states like U.P., Punjab, West Bengal, Assam, Jharkhand, Tamil Nadu and J&K are in this group. 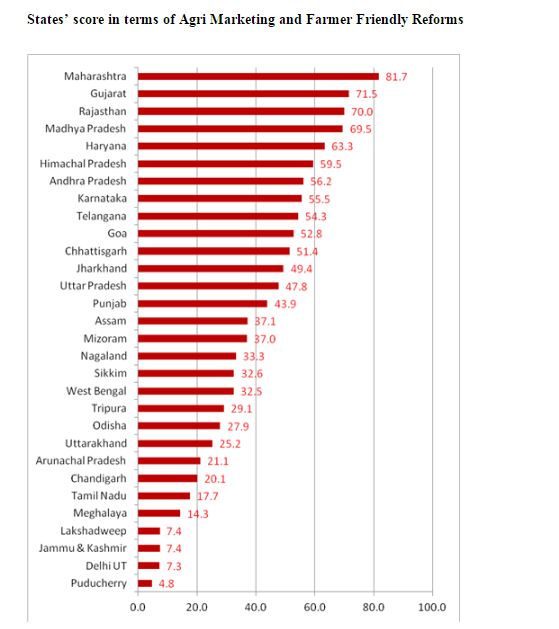 * Some states and UTs either did not adopt APMC Act or revoked it. They include Bihar, Kerala, Manipur, Daman and Diu, Dadra and Nagar Haveli, Andaman and Nicobar. They are not included in the ranking.