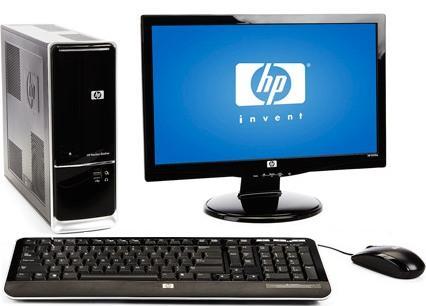 The slump in the PC market has stumped us all. About a decade ago, anyone who would have prophesized that PCs will go out of favor would have been called a fool. But, the harsh reality is that smartphones have taken over the world as the preferred communication/entertainment device, and are causing pain to PC makers such as Lenovo (OTCPK: LNVGY), HP Inc. (NYSE: HPQ), Dell, Apple (NASDAQ: AAPL), Asus, and Acer.

The United States returned to growth in the second quarter even as other regions declined. Loren Loverde, VP, Worldwide PC Trackers and Forecasting, said,

“Our long-term outlook remains cautious. However, the strong results in the U.S. offer a glimpse of what the market could look like with pockets of growth and a stronger overall environment. It’s not dramatic growth, but it could push the market into positive territory slightly ahead of our forecast for 2018.”

According to Gartner, US PC shipments totaled 15.2 million units in Q2, an increase of 1.4 percent on a YoY basis. The second and third quarters are typically PC buying season for the U.S. public sectors. IDC estimates paint the picture much better; they estimate Q2 US PC shipments to be 17 million for a growth of ~5 percent over the same quarter a year ago. 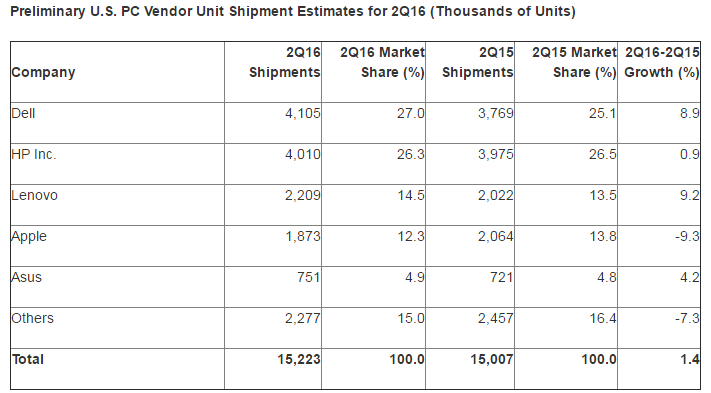 Apple Inc. (NASDAQ: AAPL) is losing its ground in the PC market. Although investors fret most about the iPhone revenues, this is one segment which one should not lose sight of.

Apple lost its market share in the U.S. IDC estimates the Q2’16/Q2’15 growth of -7.9 percent, while Gartner is slightly more negative at -9.3 percent.

On a worldwide basis too, Apple disappoints. While other industry players such as Lenovo, Dell, HP Inc., and Asus increased their global market share, Apple slipped in an aggressively competitive market. 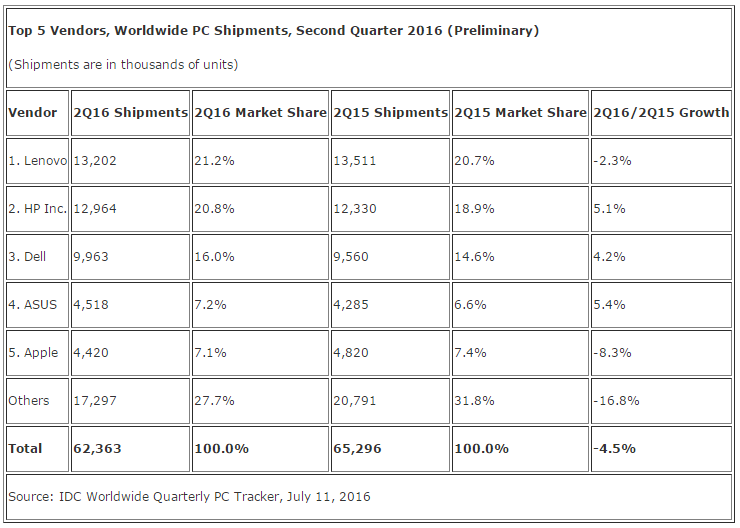 A Note On HP, Dell, And Lenovo

HP Inc. had a solid quarter after a complete year of decline. The U.S. contributed 11.5 percent to the gains, as the company resolved its inventory buildup. In the U.S., HP had a market share of 26.3 percent in Q2, having shipped more than 4 million units, according to Gartner. IDC puts the company at the top with a market share of ~28 percent and more than 4.7 million shipments.

Lenovo retained the top spot worldwide, even as it shipped fewer units on a YoY basis. The company witnessed strong growth in the US but weakness in other markets weighed on the numbers. EMEA was challenging as inventory rose during the quarter while the decline in APAC region was less than the average.

Dell took the third spot in the global PC vendor list, with market share varying from 15.2 – 16 percent. It also shipped more units in all regions in Q2. It saw substantial growth in the United States with more than 4 million units shipped. Japan proved to be really healthy for the company, while EMEA was a drag on overall results.

IDC expects that the expiration of free Windows 10 upgrades may push users into buying new systems rather than updating older ones. Commercial evaluations of Windows 10 remain healthy and a near-term driver that could also be contributing to the relative strength in U.S. shipments.

“One of the ongoing problems in the PC market has been the price hike in selected regions due to the weakening local currency against the U.S. dollar. The price issue has impacted the EMEA and Latin America regions for the past year. However, PC shipment declines became rather modest in the second quarter compared with previous quarters, which suggests a fading currency impact.”