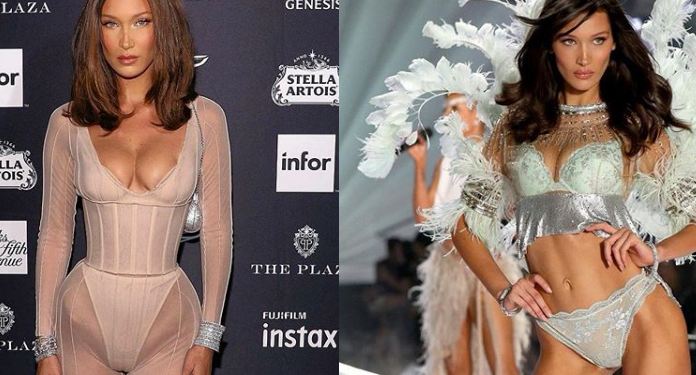 American model Bella Hadid is facing a torrent of criticism after offended Muslim netizens took her to task for insulting Arab nations like Saudi Arabia and also the United Arab Emirates.

This Sunday, Bella Hadid posted a photo on her Instagram Story where her foot was facing a trio of airplanes, one a UAE plane and the other a Saudi plane.

The angle of the photo offended Muslim netizens as it looked like she was insulting the flags that were painted on the planes’ tails.
Soon enough the hashtag #BellaHadidIsRacist starting trending.

What many do not know is that Bella’s father is a Palestinian and her mom is Dutch.

Bella took refuge in her Palestinian roots to curb down the criticism coming her way.

I would never want my posts or platform to be used for hate against anyone, especially those of my own beautiful & powerful heritage,” Hadid told her followers and critics. “I love and care so much about the Muslim and Arab side of my family as well as my brothers and sisters throughout the world. I want to send a sincere apology to those who ever thought I would put blame on them, especially to Saudi Arabia and the UAE,” she wrote.

She also added: “This was an honest mistake on an early morning… never, ever would I intentionally try to offend anyone like that. I am so sorry.”

Not sure how the apology worked though, as many are still not buying it:

That’s a lesson not to taunt the Saudis and Emirates again 🇦🇪🇸🇦. Good luck in your career.

Hadids are also known for their denouncement of the US President Donald Trump whose wife Melania Trump was a target of ridicule by Bella Hadid’s sister Gigi Hadid. Gigi Hadid, also a model, later had to apologize for Melania Trump impression, that many thought was plainly racist.

Gigi Hadid shows why she is the hottest model of our times!

Bella Hadid is known for her sex appeal and is a top model today:

#BellaHadid in her gorgeous form!

This American model has a Palestinian father. #BellaHadid

#BellaHadid looks super cute in this!

#BellaHadid is just a 22 year old.

Known for her skinny frame #BellaHadid is considered one of the top models today.

Their father Mohamed Hadid had also criticised Donald Trump for his decision to recognize Jerusalem as the capital of Israel. Here is what he had written:

I was only about 18 month old. After we were expelled from our beloved #Palastine into the Syrian refugee camps .. My dad got a brief job at the university of Damascus in #Syria .. This was our family pictures for a Palastinian Refugee Card. The Hadid Family, my beautiful mother Kharia Daher Hadid. My father Anwar Mohamed Hadid. My sisters Ghada,Raida, Sana, and me. Thank you #Syria for taking us in. And thank you America for allowing All of us to realize our dreams …

The Saddest day of my life as an American Palastinian.. and to all the Palastinian’s that have endured the Israeli occupation of our fathers and great grandfathers Land. Now Mr president Trump with a simple signature gave with no return Our beloved holy land Jerusalem to the Israelis as their capital … this is not a real estate deal .. what’s worse that all the Arab leaders sold us out .. no shame no heart no soul Disgusting of their behavior. Palestine land for the Palastinian.