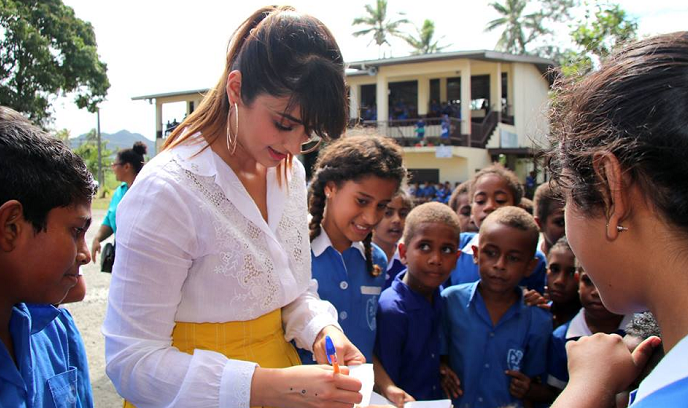 The glamorous Bollywood actress was appointed Tourism Fiji’s brand ambassador for the Indian market in 2017.

Ileana D’Cruz will be exploring various activities and showcase more of the country’s unique offerings to potential travellers from India, a press statement said.

Minister Koya said students of Rampur Primary School were fortunate and privileged to have Ileana D’Cruz visit them.

“One of the reasons why she is our brand ambassador is because we know for a fact that she actually feels very much at home when she comes here. She talks about Fiji when she is overseas,” Minister Koya said.

“Following her successful travelogue that was filmed in Fiji last year, she continuously promoted Fiji on the social media channels. She has about eight million followers worldwide.

“She is in Fiji to explore different regions such as Nadi, the Coral Coast, the Mamanuca Islands, Pacific Harbour and Savusavu and her experience here will showcase Fiji to the rest of the world as a destination,” Minister Koya added.

He said Ileana D’Cruz was a great inspiration to Fiji’s younger generation and urged the students to work hard towards their dream and fulfil them like De Cruz had.

D’Cruz’s message to the students was to always believe in themselves while growing up.

“No matter what people say, they might say you can’t do something and not encourage you but you are your biggest supporter so believe in yourself. You be the big powerhouse behind you. Always tell yourself that there’s nothing you cannot do,” Ileana D’Cruz said.

Ileana is one bikini babe! Take a look at these pics!