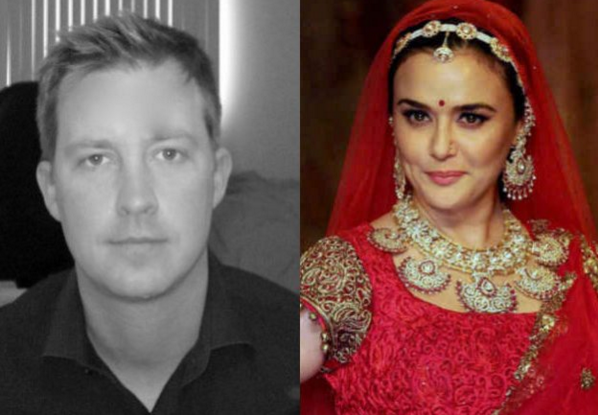 Her fans are heartbroken that the lovely Preity Zinta has chosen to tie the knot with her US boyfriend Gene Goodenough. But the worst is that the actor has not even put one picture that confirms the same till the writing of this report! It seems our lovely Preity chose the path of her Bollywood friend Rani Mukherjee who too had tied the knot with her beau Aditya Chopra in a hush-hush ceremony!

The otherwise straightforward Preity Zinta who never shies away from making her point is silent on such an important in her life! If it wasn’t for Bollywood actor and former Miss Universe Sushmita Sen then Preity’s fans wouldn’t have even known about such an important milestone in her life. Preity was earlier involved with businessman Ness Wadia whom she had an acrimonious fallout later.

Here is what Sushmita Sen wrote: 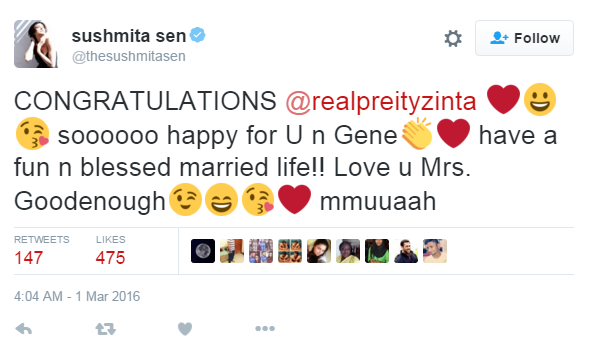 While many congratulated the feisty Preity Zinta, many were also surprised that their favorite Bollywood beauty is getting married! 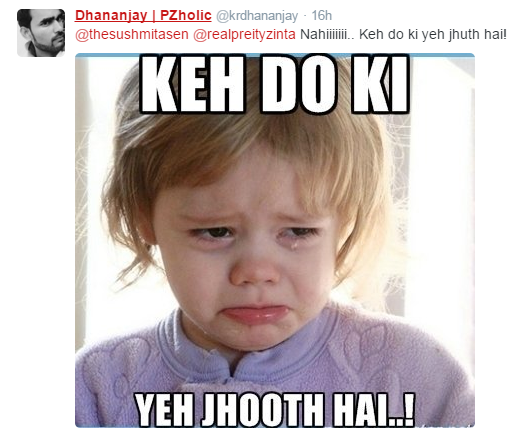 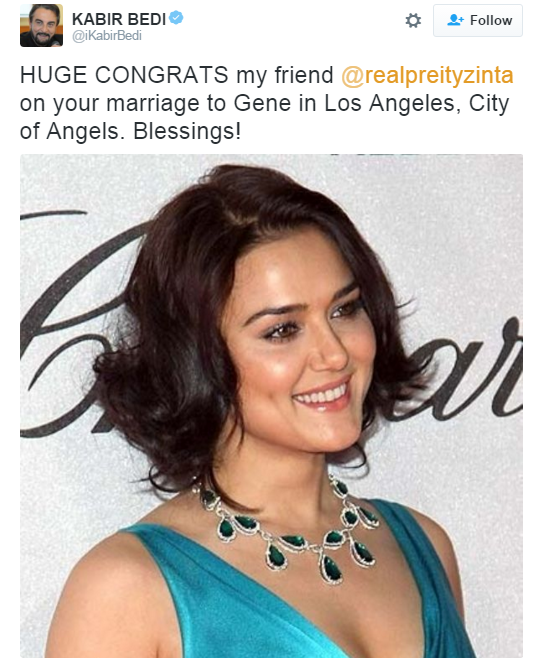 PreityZinta-FanClub tweeted the happiness that many PZ fans are feeling at the moment: “The congratulations are pouring in for @realpreityzinta & Gene. We wish them a happy married life filled with happiness. #preitygenewedding.”
The leading lady of Bollywood was earlier in the limelight in the month of February this year when she had tweeted her support for the Indian Army soldiers. In a series of tweets, she wrote:
“65% of India is under 35 years of age. It is the responsibility of our youth to take our country forward. I sincerely hope that we use the- it’s their duty to use Freedom of Speech responsibly. To move forward we need to cut the crap & focus on things that are important.
And if U need motivation to be patriotic & respect our national flag then pls 🙏go to our borders & see how our armed forces live & sacrifice.
Actions always speak louder than words. I don’t want to preach but I had to get this off my chest & this topic was really bothering me.
Now I rest my case Jai Hind ! This is the most appropriate way to end our #pzchat ! Ting 😘”
We wish Preity Zinta a happy future and hope she would share the happiness with her fans as well!
Feature image Pic credit:  IndiaTVnews
Pic credit: Twitter