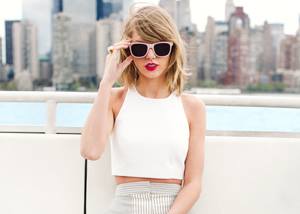 New York, July 18, 2016: In a Facebook post, singer Taylor Swift, has taken both Kanye West and Kim Kardashian head-on and their claim that she beforehand knew that West is going to call her a ‘bitch’ in a song.

Titling the post as “That moment when Kanye West secretly records your phone call, then Kim posts it on the Internet,” the singer questioned as to where is the video of Kanye telling her that she was going to be called ‘that bitch’ in the now infamous “Famous.”

In fact, she said that the video does not exist because, well, it never happened! In fact, Taylor Swift has said that she wanted ‘to like the song’ and wanted a ‘friendly’ relationship with him but then, he never ever played up the song.

That moment when Kanye West secretly records your phone call, then Kim posts it on the Internet. pic.twitter.com/4GJqdyykQu

Meanwhile, Taylor Swift got support from the online world as Kim and West’s apparent recording had many loopholes as it nowhere showed that the singer, then merely a teen, had ever agreed to the use of the offensive word.

This shows the conversation Taylor & Kanye had, but where is the agreement? pic.twitter.com/bxPWg78dji

Kanye West never truly recovered from the backlash that he had to face after his rant in the song against the sensational Taylor Swift. Taylor Swift-Kanye West feud began when in the year 2009, he stormed the stage when the new artist, Taylor, was getting her award for the Best Female Video. Kanye abruptly cut the teen singer from giving her acceptance speech and grabbed the mic to protest against her getting an award instead of Beyoncé.

This year at the Grammy Awards, where she won Taylor Swift hit back at Kanye West during her acceptance speech in which she gave a powerful message to the young women:

“There are going to be people along the way who will try to undercut your success or take credit for your accomplishments or your fame….But if you just focus on the work and don’t let those people sidetrack you, some day when you get where you’re going you will look around and know it was you and the people who love you who put you there, and that will be the greatest feeling in the world.”

Swift, this year won the Grammy for The Best Pop Vocal Album 1989 and for The Best Music Video for Bad Blood (Kanye had no good words for this too, in short ,there is indeed a lot of Bad Blood between the two).