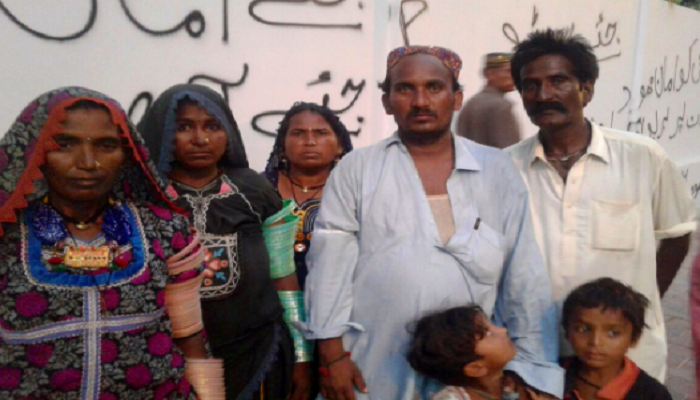 Karachi: A poor Hindu family living in the Gadap Town, a town in the northwestern part of Karachi, protested in front of the Karachi Press Club as the land mafia is making their lives hell.

Minorityvoices.pk reported their agitation which has been translated by us at www.currentriggers.com.

This agitation took place last Tuesday and the agitating Hindus said that the land mafia’s actions are affecting a total of 500-600 houses which are spread in the 16 acres of land.

28-years old Raja Bhil and 40-years old Rekha Bhil also said that government must listen to them as soon as possible and help them, as the local police are unwilling to act to protect their rights.

They also said that they were living in the piece of land for the past 40 years but now the land mafia wants to throw them out and is threatening them with dire consequences if they failed to abide by their dictat.

Rekha Bhil said that they must be heard soon. She also added that they were poor labourers and where will they go if they agree to the demands by the land mafia?

Pakistani Hindus are a minority in the Islamic nation and many have complained  of severe persecution.