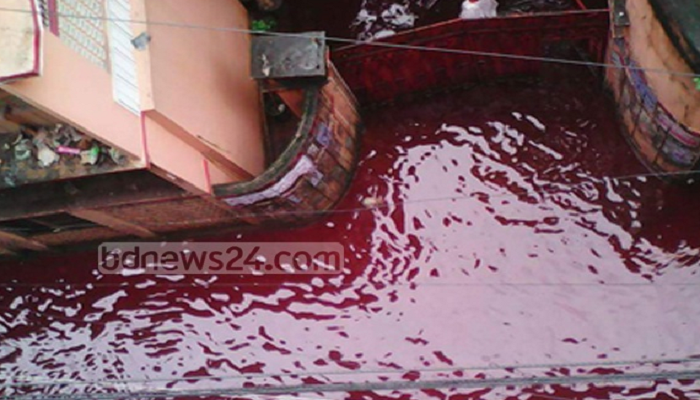 This Eid it was raining in Dhaka but people went ahead with the sacrifice and later the streets turned as rain and blood of the sacrificial animals got mixed creating what most vegetarians or those from the outside world would describe as a scene equivalent to a scene that was enough to give them a heart attack.

Understanding Dhaka and her people

But most people from Dhaka do not see it like this and were least worried about the blood running down the streets and giving the city a bad name. Dhaka, the capital of Bangladesh, is Muslim populated and sacrifice is part of the Islamic traditions.

But this scene was something which many can witness during the rainy seasons as Dhaka still does not have a good drainage system and rains are part and parcel of their lives till later.

Even in other meat markets of Bangladesh, not just Dhaka, where animals are slaughtered every day in large numbers, one can see similar scenes with blood mixing with the water creating an illusion that it was a blood Tsunami heading one’s way.

You May Also Like: Eid-ul-Azha in Bangladesh: Children not to slaughter animals

While those who live outside or the vegetarians will cringe at even imagining this sight, yet, this is an everyday affair in this nation and that is one reason why people are least concerned about the pictures or their impact on the outside world.

However, this does not absolve the civic administration which was to take care of the animal body disposal after the sacrifice considering that it was expected that it would rain on Eid al-Adha/Eid-ul-Azha. Dhaka being the capital city should show its best face to the world but the administration failed it.

There were tall claims being made by the civic authorities but yet, just like any other rainy day, the administration failed to make adequate provisions leading to people worrying about diseases that could spread due to the inefficient system.