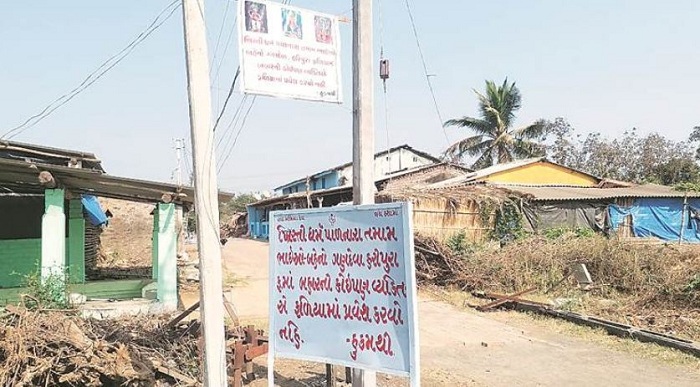 Tribal Hindus are reportedly so ‘fed up’ of Christian conversion that they have put up banners announcing a ban on the entry of the so-called outsider Christians.

The case reported by the Indian Express is eerily similar to the case from Sri Lanka, where the minority Tamil Hindu community put up banners of Nandi to thwart stop the Christian Missionaries.

The latest case is from Navsari district’s Gandeva village of Gujarat where the Tribals took to this measure to stop the “outsiders from coming to the village and converting tribal Hindus,” reported the Indian Express.

The Indian Express report notes that while the village has a population of 7,500 with the majority of them belonging to Halpati community, a Scheduled Tribe, others are from the Bakshipanch.

Jayanti Mistry, the deputy sarpanch of the village told this paper that the “local Hindus are fed up with the spread of Christianity in our village. At present, there are over 900 Christians in our village. There are 70 tribal houses, out of which 12 families have converted to Christianity. On every Sunday morning, Christian priests from different neighbouring districts come and preach Christianity, and lures innocent tribals to get converted into Christianity.”

Satish Kataria, who is the Village sarpanch, said that the conversion began around eight years ago when the first prayer hall of Christians was built.

No one has opposed these banners said Katariya but added that he has come to that some Christians of the village are unhappy but he said that he requested the villagers to keep the peace.

Another Christian Missionary puts endangered tribe at ‘risk,’ could be tried for Genocide!

Sub-Inspector B L Raizada, who visited the village to take a look at the situation, told The Indian Express that:

“We visited the village and talked to the residents of Haripura street, where such banners have been put up. We spoke to Hindu tribals and those who have converted. They all have given assurance that there would no problem of law and order in the village. We have not told the villagers to bring the banners or board down. Some of the villagers are against the outsiders spreading Christianity. Therefore, such boards and banners have installed by them.”