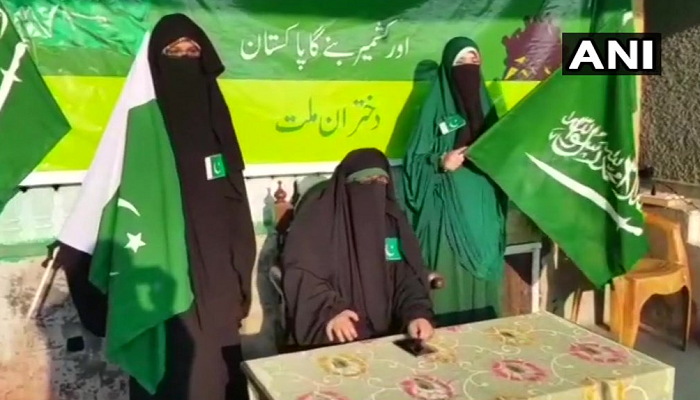 Separatist and Dukhtaran-e-Millat Chief Asiya Andrabi observes Pakistan National Day in Srinagar today and she made shocking statements which shows the extent of radicalism that has been sweeping Kashmir.

Speaking on the occasion, she said that ‘for us people are either Muslims or ‘kaafirs’ and a Muslim’s country is Pakistan.”

Asiya Andrabi also said that Pakistan was not formed on basis of a nationality and that Islam is the basis of its foundation.

Due to growing terrorism and radicalization in Kashmir, many Hindus and other minorities have been forced to become refugees in other states.

Minority Christians too have come under fire but rarely does their plight spoken about. In 2012, a Shariah court threw 3 Christian Priests out of the valley after being sure that the pastor name MC Khanna of All Saints Church of Srinagar was luring the Muslims to become Christians.  Dutch national named Jim Borst and one Gayoor Messah were also thrown out.

For us people are either Muslims or 'kaafirs' & a Muslim's country is Pakistan. Pakistan was not formed on basis of a nationality, Islam is the basis of its foundation: Asiya Andrabi (center) on Pakistan National Day in #JammuAndKashmir's Srinagar. pic.twitter.com/7znjj2MAQ0

Due to radicalization, Buddhists of Ladakh have also been led by Ladakh Buddhist Association have started demanding that Ladakh be free from the stranglehold of Kashmir, while Jammu is already protesting the presence of Rohingyas which is being sidelined by the J&K government.

Read what Ladakh Buddhists are demanding from the rest of India by clicking here.