The murderers are at large and till the writing of the report, no arrests have been made.

BJP has called for the Mysore Bandh on Monday at this latest incident of political violence against its men. It has come to light that Late Raju was standing at a tea shop in Udaygiri in Mysore when he was stabbed by a sickle.

His murderers remain unidentified and came to the place on a bike.

But many in the BJP are vocal in their condemnation and point that Late Raju was involved in stopping the illegal construction of a Mosque in Kyatamaranahalli (Mysore) and this could be the reason behind his murder. An MP of BJP, Pratap Simha wrote on Twitter:

While Amit Malviya who is the in-charge of BJP’s national IT and Social Media department believed that the murder was due to Raju’s involvement in Hindu issues. He wrote:

“BJP worker Raju hacked to death in Mysore. It is believed his opening gates of a local Ganapathi temple irked members of ‘other’ community!” 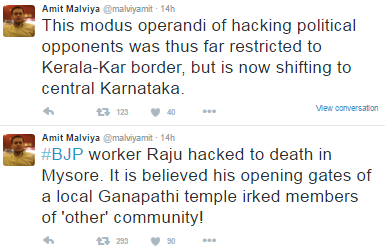 His next comment is perhaps the most worrisome, he wrote: “This modus operandi of hacking political opponents was thus far restricted to Kerala-Kar border, but is now shifting to central Karnataka.”

Several RSS and BJP workers have been killed in recent months with the Prashanth Poojari and Sujith murder cases evoking strong reactions from RSS and BJP.

On February 25th, 2016 a Vishva Hindu Parishad leader of the Dalit community, late Arun Mahaur was killed in Agra.

He had an altercation with one Shahrukh (24) who was accused by the people of the Tola Munnalal locality under Mantola police station area doing “goondagardi” and a complaint was filed against him.

A letter written by the locals accused him of abusing the residents and misbehaving with the girls. It is alleged that at on February 25, 10.30 am the VHP leader was going to his furniture shop in Nai ki Mandi from a nearby temple, Shahrukh fired at him. The VHP leader was rushed to a hospital where he was declared brought dead.

All the accused in the murder of Mahaur; Shahrukh, Raja, Dilshad, Imtiaz and Abid were also arrested by the police.

But just like in the case of Raju, whose murder is being downplayed as simple political enmity, Mahaur’s family also alleged that he was eliminated as he was opposing cow slaughter.