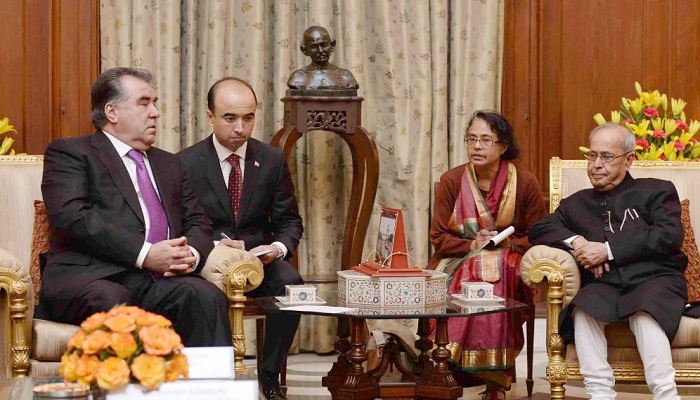 The President of India, Pranab Mukherjee yesterday (December 17, 2016) received Emomali Rahmon, the President of the Republic of Tajikistan at Rashtrapati Bhavan. He also hosted a banquet in his honour.

Welcoming the President of Tajikistan to India, the President Pranab Mukherjee said his visit to India is on the eve of the 25th anniversary of India-Tajikistan diplomatic relations. It bears testimony to the abiding friendship between the two nations and the value that the two countries attach to our bilateral relations. India was among first countries to recognise emergence of Tajikistan on dissolution of the former Soviet Union. Over the last 24 years, the two nations have had a fruitful co-operation.

The President Pranab Mukherjee said India recognizes President Rahmon’s role in ensuring peace and stability in Tajikistan which has a similar salutary effect in the region.

Subsequently, in his banquet speech, President Pranab Mukherjee said India appreciates the close co-operation that the two nations have in the United Nations and other international organizations.

India is grateful for Tajikistan’s support for her rightful claim to a permanent seat in the UN Security Council and its membership of the Shanghai Co-operation Organisation.

Pranab  also said that said as neighbours with a shared vision of peace and stability in our region:

We both desire to strengthen our defence and security co-operation in order to effectively address our concerns. The world – and particularly our region, is, today, faced by the growing threat of terrorism. Both India and Tajikistan are opposed to this menace in all its forms and manifestations. Our peoples, as secular and pluralistic societies, desire to live in peace. For us, development and progress of our nations is of utmost importance. We are also committed to assist our mutual friend and neighbour, Afghanistan, to realise the goals and aspirations of its people – through an Afghan-led and Afghan-owned peace process.