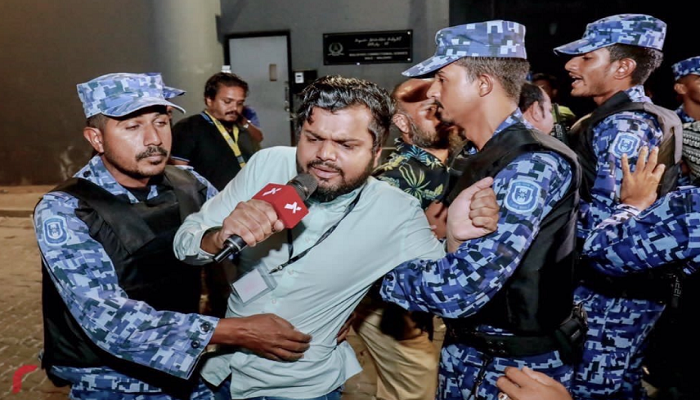 India is unhappy with the current political turmoil in the Maldives which saw several stalwarts being thrown in prison. In a statement issued, Indian government underscored the importance of democracy and said:

Since the beginning of the political crisis in the Maldives, India has repeatedly urged the Government of the Maldives to allow all institutions, including the Supreme Court and the Parliament, to function in a free and independent manner, and to permit genuine political dialogue between all political parties. This has also been the demand of the international community at large.

It is, therefore, with deep dismay that we learned that the former President of the Maldives as well as the Chief Justice of the Supreme Court are being sentenced to long prison terms without fair trial. This casts doubt on the commitment of the Government of the Maldives to uphold the rule of law and will also call into question the credibility of the entire process of Presidential elections in September this year.

India believes that a democratic, stable and prosperous Maldives is in the interests of all its neighbours and friends in the Indian Ocean. It reiterates its advice to the Government of the Maldives to restore the credibility of the electoral and political process by immediately releasing political prisoners including former President Gayoom and Chief Justice Abdulla Saeed and creating the necessary conditions for the participation of all political forces in the Presidential Elections.

In a strong statement, it said that the President Gayoom and the justices’ arrest, trial and sentencing ‘were egregiously unjust and politically motivated, and directly orchestrated by President Yameen.’

Welcoming the statement by India it said that the MDP shares India’s sentiments, as well as the concerns expressed by other members of the international community.

“It is clear as daylight that President Yameen intends to steal the upcoming presidential elections, by jailing all his opponents, preventing opposition candidates from contesting, and using the politicised Elections Commission to rig the vote.

Maldivians must remain vigilant, and work peacefully to prevent this electoral theft from taking place. The MDP calls on the international community to impose targeted sanctions on regime leaders and senior officials in the Maldives, particularly those who are implicated in human rights abuses, who are working to undermine the Constitution, and are helping President Yameen to steal the presidential elections.”