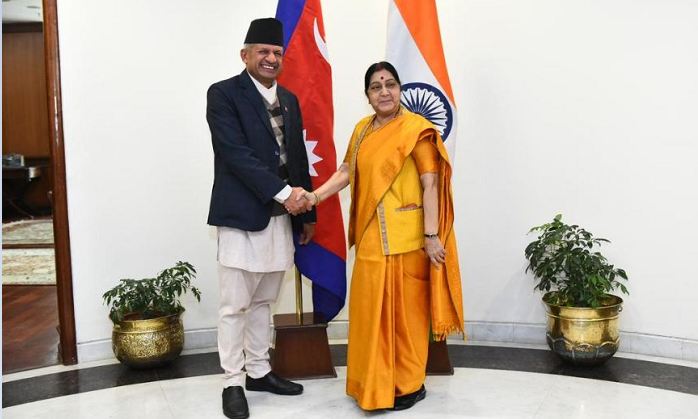 During this time, the two Ministers took out time and reviewed recent developments in bilateral ties across diverse sectors, including progress achieved on the three transformative initiatives launched in 2018 in the areas of agriculture, railways and inland waterways as well as pace of implementation of ongoing bilateral development and connectivity projects. The two Foreign Ministers expressed satisfaction at the significant progress made in different sectors of cooperation as a result of intensified bilateral exchanges at all levels in recent months.

The two Ministers reiterated their commitment to maintain the new momentum and to further strengthen the traditionally close and friendly ties between the two countries. Foreign Minister Gyawali also extended an invitation to the External Affairs Minister to visit Nepal to co-chair the next meeting of the Joint Commission. External Affairs Minister accepted the invitation; the two Ministers decided to hold the next meeting of the Joint Commission at an early date.

External Affairs Minister hosted a lunch in honour of the Minister for Foreign Affairs of Nepal.

Army Chief of Nepal, General Purna Chandra Thapa, Nepal Army will also be visiting India from 12 to 15 January 2019 on his first official bilateral visit after taking over the command of the Nepal Army.