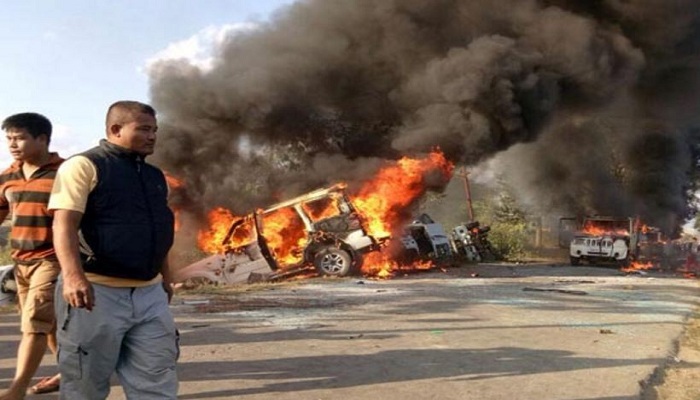 Many would say that this state is way more beautiful than Switzerland. But today the state is burning and the people are in pain.

This young man has written an open letter to the Prime Minister wanting to see what solutions are possible for his state and whether the center has any role to play in the current turmoil.

Here is the full letter that the Manipur youth wrote and was first published in The Sangai Express (English edition on page 6 of 17-12-2016):

Hon’ble Prime Minister,
I am Ronaldo Laishram from Manipur, the place called “Switzerland of India”, it is the place where the Indian National Flag was hoisted for the first time in India by Indian National Army, the beautiful land surrounded by serene landscape, exotic wildlife, floating island to the warm-hearted locals with its own rich culture and tradition but now a place with full of problems. I am just a student who wants to see a developed India and a big supporter of your vision India. Today, I would like to request something and seeking your kind attention. My agenda is to bring peace, prosperity, communal harmony in Manipur and trying to make our crying mother live peacefully by seeing her children staying happily.
It is arduous to see and hear the incidents which are happening in day to day life in Manipur. Days are not passed without having any problems. Today, we are in a stage where the future of our state is hard to imagine. Once a peaceful princely state but now with full of problems. It is more than 67 years since Manipur was merged to India but till now the development condition of Manipur is worst. Rightly put, we are not developing at all. Look our communication lines, transportation, and other services they are far behind compared with other states. There might be many reasons, but I can say the main reason is that Central government doesn’t take care of our state properly and state government fails to represent common citizen in many ways and didn’t perform their duties.
But for this letter, I would bring the current situation of Manipur. The present situation in Manipur insinuates how law and order has successfully failed across the state. People are killed like mosquitoes every now and then. And it is a clueless hunt for the law and order keepers to book and punish the criminals. You might hear or not, United Naga Council (UNC) had imposed the indefinite economic blockade on the state’s lifelines – National Highway 2 (Imphal-Dimapur highway) and National Highway 37 (Imphal-Silchar highway) starting from November 1 midnight and still going on, disrupting the supply of commodities to Manipur. Vehicles coming toward Imphal are being checked by the supporters of UNC to stop the transportation of essential commodities to the hills. The economic blockade has not only caused a shortage but also children are being deprived of education as they can’t go to schools due to non-availability of fuel. It also added fuel to the fire when the demonetization process is going on where the people don’t have adequate money in their hands.

Surprisingly, what is intriguing is the fact Central government keeps mum on this matter and the national media — both print and electronic, without any exception have purposefully blackout this burning issue engulfing Manipur. Now, common people are starting considering if there are any conspiracy between government and UNC to unsettle the state Manipur.
And in the recent ambush, NSCN-IM killed four Manipur police personnel, injured eleven. Still, you don’t say anything about it. People would like to know if there are any plot between government, NSCN-IM and UNC to disrupt the harmony among the people of Manipur and creating chaos to destroy the state. According to my viewpoint, the present policy of the Government of India appeasing Naga underground (NSCN-IM) sacrificing the vital interest of Manipur added fuel to the prevailing ethnic tension in Manipur. This is definitely not a wise policy of the Government of India. If the India government gives freedom to NSCN-IM, it will destroy the social and cultural fabric of the state of Manipur and also of Assam and Arunachal Pradesh and will create a chaos and invite civil war.

The people of Manipur welcome the dialogue between the Government of India (GOI) and the NSCN-IM for a peaceful settlement or for that matter with any insurgent group anywhere. However, in doing so, care should be taken so as not to disturb other states and communities. Any solution should be confined within the state of Nagaland. It will also be wrong to consider the NSCN-IM leaders, including Th Muivah, as the sole representatives of the Nagas. They are not democratically elected. Whatever might be in any case, the Article 3 of Indian Constitution regarding alteration of state boundaries shall not apply in respect of Manipur to protect the 2000-year-old territorial integrity of Manipur.
Sir, I am hoping that you are aware of what is happening in Manipur through the daily intelligence reports placed on your table. Does it not touch your heart seeing the vulnerability and plight of the people of this easternmost state of Manipur having a population much less than the population of your own town of Vadodara in your westernmost state of Gujarat?

The sad part is that we do not have a leader like you here in Manipur. We do not have the bold leader who can stand up and speak out about such grievances that are continually faced by the people.

I would like to request you kindly find a permanent cure to this problem in Manipur. Among all the problems of Manipur, the constitutional amendment to bring about communal harmony, unity, equality and solidarity among all ethnic groups of Manipur is the number one priority. Sir, we are expecting a lot from your new government but now we are worried that our hope will be in vain.
Sir, I don’t want to bore you with the unnecessary details through this letter. I mentioned only some of the problems of Manipur and there are lots more to say. Sir, I have some innovative ideas which I would like to share with you and I would be very glad if you permit me to meet with you. I would like to contribute and see a developed Manipur and India in all aspect. Eagerly waiting for your favourable response.

This letter by Ronaldo Laishram has been produced verbatim and no additions or editing has been made for the sake of consistency.