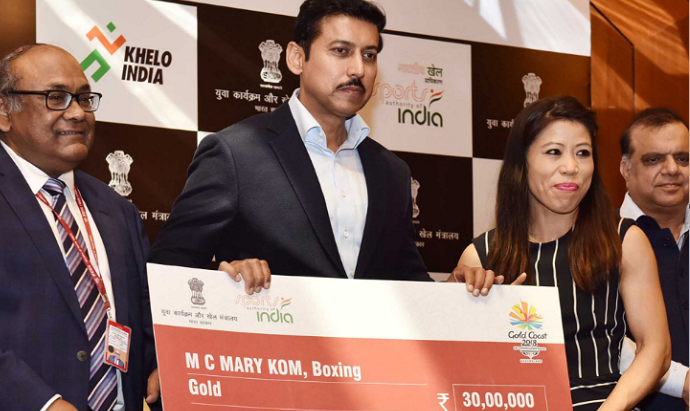 Minister of State Youth Affairs and Sports Col Rajyavardhan Rathore has said that our sportspersons have amazing capacity to do well in every sport and not just in skill based games. At a function to felicitate the medal winning sportspersons of the recently held Commonwealth Games 2018 here today he said Sportspersons are ambassadors of the country, role models of the youth and every Indian feels proud of them. Terming sports as a soft power, Rathore said “we don’t fund any of the soft powers such as films, cuisine and culture but we fund you”. He further made it clear that there is no dearth of funds for sports but every penny has to be used to its optimum. About 56 sportspersons from 9 sports disciplines including Mary Kom, MirabaiChanu, Neeraj Chopra, SumitMallik, Sushil Kumar, VineshPhogat, Rahul Aware, SainaNehwal, PV Sindhu, KidambiSrikanth, Deepika Pallikal , SouravGhosal, VikasKrishan, Gaurav Solanki, Manu Bhaker, Jitu Rai, TejaswiniSawant, Heena Sidhu, ManikaBatra and others were felicitated with cash awards at the function. Roughly each of the gold medal winner received cash award of Rs 30 lakh whereas the silver winners were given Rs 20 lakh each and bronze winners were awarded Rs 10 lakhs.

Sharing his experience as a sportsman, Col Rathore said there will not be a time when there are no distractions or limitations but we have to learn to concentrate and try to overcome them. The whole journey of sportsmen is in close co-ordination with Sports Authority of India (SAI) and the Ministry of Sports and Sports Ministry team is committed to resolve all the issues, he added. The Minister asked them to justify with logic their demands and act responsible. Advising the winning sportspersons for the future he said the accolades will not last for ever whereas the love for the game will.