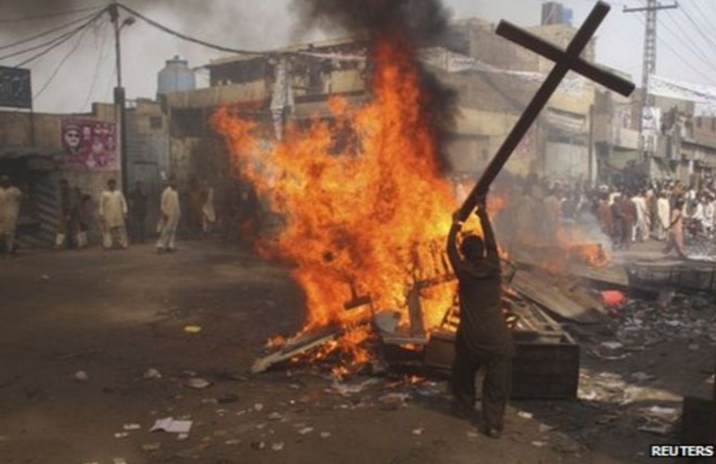 Professor Anjum James Paul is a known Christian voice in Pakistan and he is not the one to mince words when it comes to human rights. He is also the Assistant Professor of Political Science and the Head of Department at the Post Graduate College in Samundri, Pakistan and has taken up many cases of persecution of Pakistani Christians.

Here is an exclusive conversation with the man himself:

Certainly not. I present first two articles of the Constitution of Pakistan 1973 on which Constitution lies and status of minorities and especially of Christians can be judged.

Article 1 (1) The Republic and its territories

Pakistan shall be a Federal Republic to be known as the Islamic Republic of Pakistan, hereinafter referred to as Pakistan.

Article 2 Islam to be State religion

Islam shall be the State religion of Pakistan.

A state that has state religion is a biased state and it protects the rights of the followers of a particular religion and fails to provide equal citizenship to all citizens without any discrimination.

In short, Pakistani Christians do not enjoy equal citizenship in Pakistan.

Please give a few more examples of discrimination from the Pakistani Constitution.

Article 25 (1) of the Constitution of Pakistan guarantees “All citizens are equal before the law and are entitled to equal protection of the law.”

But according to Article 41 (3) of the Constitution of Pakistan, “A person shall not be qualified for election as President unless he is a Muslim……….”

And according to Article 91 (3) of the Constitution of Pakistan “After the election of the Speaker and the Deputy Speaker, the National Assembly shall, to the exclusion of any other business, proceed to elect without debate one of its Muslim members to be the Prime Minister.”

Such provisions lead to a situation where a member of the Parliament coming from the minority background automatically cannot become Chairman Senate and Speaker of the National Assembly because only a Muslim can ascend such a position.

Is this not total negation and violation of article 25 (1) of the Constitution of Pakistan?

Pakistan needs to address all discriminatory articles from the Constitution of Pakistan and discriminatory laws wherever they exist to ensure equality between the majority and the minority. Religious minorities are mostly a soft target of the majority. It was expected that after the verdict of the Supreme Court of Pakistan regarding protection of minorities in 2014 and the National Action Plan, the situation would change as far as the minority rights are concerned. But it is still a question mark.

Have you taken any initiatives to check this situation?

I have already requested the esteemed offices of the government of Pakistan and the Chief Justice Supreme Court of Pakistan on December 19, 2016 to review article 19 of the Constitution of Pakistan so that there must be glory of all religions. The Federal Ministry of Human Rights, Federal Ministry of Interfaith Harmony and Provincial Ministries of Human Rights & Minorities Affairs have failed to provide legitimate rights to Pakistani Christians. These ministries are only restricted to cake cutting ceremonies on the religious festivals like Christmas in the President House, Prime Minister House, Governor House and Chief Minister House etc. just to show the world that minorities are enjoying full rights. Rights can only be enjoyed when they are given to the deprived but this cannot happen merely by cutting cakes.

Sadiq Khan as the Mayor of London got much appreciation in Pakistan. How do you see this?

Absolutely, Sadiq Khan as the Mayor of London won appreciation in Pakistan. This is a good gesture and we appreciate it. This shows that there are equal rights and equal citizenship to all citizens without any discrimination or bias in the United Kingdom. We also dream of a Christian Mayor of Islamabad or any other city of Pakistan. This can only be possible when all citizens are equal before law without the concept of minority or majority.

Bilawal Bhutto Zardari had said that he would like to see PM from Christian community one day. Is that possible in near future?

This was his political statement. He is the Chairman of Pakistan Peoples Party which is the ruling party in the province of Sindh. Minorities now have reservations because the Minority Protection Bill has been recently reverted by the Sindh government on the pressure of radicals. Religious minorities now fear that the doors of kidnapping of the minority baby girls and women have been opened again (by reverting the Minority Protection Bill) to prey them for forced conversion and forced marriage.

Do you believe that the Pakistani Christians can survive while the Article 19 of the Pakistani Constitution remains? What do you think is the best way out of this?

Article 19 of the Constitution of Pakistan guarantees, “Every citizen shall have the right to freedom of speech and expression, and there shall be freedom of the press, subject to any reasonable restrictions imposed by law in the interest of the glory of Islam or the integrity, security or defence of Pakistan or any part thereof, friendly relations with foreign States, public order, decency or morality, or in relation to contempt of court, [commission of] or incitement to an offence.”

Human rights are for all human beings without any distinction. Pakistani Christians have many reservations on this article of the Constitution which is about freedom of speech etc. Though article 19 is in the fundamental rights but unfortunately this article does not seem to be a part of human rights because in many cases Christians do not have freedom of speech and expression. This article puts restrictions on a Pakistani Christian and forces him to not defend his/her religion because there is only protection to Islam in the mentioned article of the Constitution of Pakistan.

Pakistani Christians can even be put to death on the basis of religion!

Christianity is under attack by the electronic and print media and textbooks because this article is biased against the non-Islamic religions. There is openly desecration of Christianity, beliefs, and practices. Lives and beliefs of Christians are under threat due to this article so it should be amended.

As far as the migration of Pakistani Christians to India is concerned this does not seem likely in the near future or maybe there could be a trend in future because India is a secular country and citizens of a secular state enjoy their full equal rights. Pakistani state must also abolish all discriminatory articles from the Constitution of Pakistan which are a hindrance in the equal citizenship of the citizens of the same state. The state is like a mother and a mother always protects and loves her children without any discrimination so Pakistan is a mother of all Pakistanis, and a mother should love and protect minorities as it protects the majority. In case, if Pakistani Christians migrate to India, then the situation for Pakistani Christians may get tougher; there can be more doubts put on their loyalty to Pakistan. Pakistani Christians can become more vulnerable to religious victimization.

Has any Indian Christian organization, in your knowledge, tried to raise the issues of Pakistani Christians?

Professor, you criticized some NGOs too in the past. Do you believe that Christian NGOs are toeing the state line and failing to do an honest job?

There are some NGOs that show concerns that they are working for minority rights or the rights of the Pakistani Christians but, unfortunately, they are not sincere. Some Christian NGOs are only limited to photo sessions and banners and which they exploit on the social media. They do not raise voice on proper forums where their voices must echo. They mostly do not go deep or follow up the matters where there has been persecution of Pakistani Christians.

And what about interfaith harmony sessions?

So, instead of interfaith harmony, we need to resolve issues that are obstacles in peaceful coexistence and social harmony and that can only be possible through equal rights and equal citizenship in Pakistan. It is utmost need of the time to stop further exploitation of marginalized Pakistani Christians. The NGOs must force the government for equal citizenship. NGOs that work for minority rights are not very much open to the issue that Pakistani Christians face due to certain fears. It is needed that they should be vocal on the minority issues.

Many young Pakistani Christians have fallen victims to blasphemy laws. Do you believe that the civil society and media as a whole have done enough to raise their voice?

The victims are mostly unable to seek justice. There have been extra-judicial killings of many Pakistani Christians in the blasphemy cases. No sound evidence has to be presented by the petitioner because the blasphemy law can be applied for even repeating the derogatory words.

Pakistani Christians are mostly the victims of sections 295-B and 295-C of Pakistan Penal Code which describe:

In many cases, we hear people argue that the Pakistani Christians are much better off in Pak than in some Middle Eastern states where secular politics have no takers. How do you see this?

Pakistani Christians are going through the worst situation of discrimination and persecution on the basis of religion. They are deprived of their fundamental human rights. They played an equal role in the creation of Pakistan with Muslims who were also in minority in undivided India.

Pakistan came into being due to the efforts of minorities but after the death of the demise of the founder of Pakistan in 1948, Pakistani Christians are facing worst sort of persecution as their right to equal citizenship and equal rights are being denied. Pakistani Christians are equally persecuted whether they are living in Pakistan or any Middle Eastern state; they are victims of faith. It is a question that Islamic states are not ready to give the rights of equal citizenship to Christians but they want to see the entire states as secular states because there is respect of human rights and human dignity.

Last question, Professor have you ever been to India? Any plans to visit in future?

No, I have never been to India. Once I got a visa to visit India but unfortunately due to tension between the two nations I could not make ir, but I desire to visit India in future.