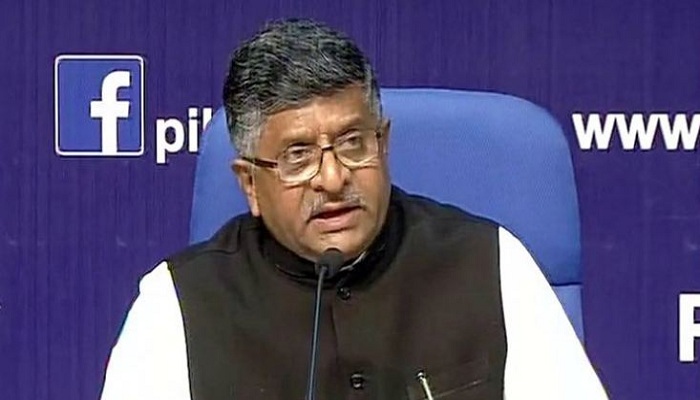 Leading from the front was Union Minister Ravi Shankar Prasad who reminded the Delhi Chief Minister about the Indian tradition of staying united at the time of national crisis. He asked:

Why is Kejriwal being swayed by the Pakistani propaganda? Kejriwal ji, there is a tradition to remain united at a time of crisis.

Also See: Video of Arvind Kejriwal that led to the press conference

He also said that now Arvind Kejriwal was now making headlines in Pakistan for raising doubts over the Indian Army and advised him to not mix politics with national security.

Ravi Shankar Prasad asked: “My question to Kejriwal is whether he believes in the extreme valor of the Indian Army,” telling him to “not demoralize the Army” by asking for the proof.
Ravi Shankar Prasad then took on the Congress leader P Chidambaram asked if the former Finance Minister’s comments were the official line of his party. He said:

“I want to ask him if he is also joining the bandwagon of doubting the capacity of our jawans in conducting surgical strikes.”

Chidambaram on Monday said that it was up to the government to provide the proof of the surgical strikes conducted on September 28 night. During the strikes, the Indian Army destroyed seven terror launch pads.

Reacting to the press conference of Ravi Shankar Prasad, Arvind Kejriwal claimed innocence and said that BJP is doing politics over his video statement. he wondered where he went wrong as he merely asked the Indian government to debunk Pakistani propaganda effectively. He also said that there is no point attacking me and shared a video on Twitter and wrote:

This false propaganda needs to be effectively countered. No point attacking me. I am wid u. Lets together expose Pak.

In short, he is not going to do what Ravi Shankar Prasad said, i.e., ignore the Pakistani propaganda, stay united and trust Indian Army. You can see what he said:

It's unfortunate that instead of standing united for nation BJP is doing politics : @ArvindKejriwal pic.twitter.com/TEzv9cgpcK

Now that @ArvindKejriwal & @digvijaya_28 have disgracefully toed Pak line on #SurgicalStrikes, subverted parts of our media will follow suit

Kejriwal came to do 'politics with a difference' and ended up being in the elite club of Nirupam & Digvijay Singh. Great minds think alike.

AAP immature poltics,will be a doom for @ArvindKejriwal ambitions for the ppl like Kapil Mishra

Omar Abdullah posted that BJP is taking mileage of the ops  for the Uttar Pradesh elections only to be countered on the grounds that the posters he is talking about were put not by BJP but by others.

No reward for guessing that this one is in UP. For the BJP & sections of the shouting brigade it's always do as we say don't do as we do!!!

@nehachoudhary01 1. C who has posted the banner. Some random guys. How can that b related to Modi or top BJP leadership?

Meanwhile, in another news,  Asiya Andrabi has been arrested for instigating youths to pelt stones.

Separatist leader Asiya Andrabi has been arrested by police in Srinagar's Kral Khud area for instigating youths for stone pelting.

Be ready to be surprised! Read What septuagenarian Anna Hazare has to say on Pakistan!

Disrespecting Indian icons is not new, remember how Olympians were ill-treated