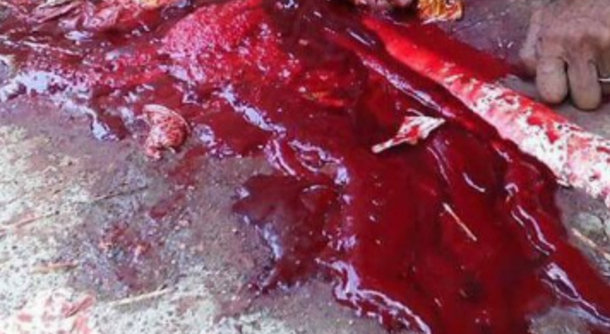 Satkhira, June 2, 2016: Bangladesh is increasingly becoming a nightmare for minorities. Another Hindu Priest has been brutally stabbed by unidentified men on Saturday.

The Hindu Priest Bhabasindhu Roy, 48, belonging to the Sri Sri Radha Gobinda Temple in Satkhira district was sleeping when he was attacked inside the temple premises.

At least 7-8 people knocked at his door and the Hindu Priest thinking it could be the security guard opened the door only to get stabbed multiple times in his abdomen, chest, neck, and back ferociously.

His condition is critical due to loss of blood while the attackers fled from the scene thinking he was dead.

This is the second such attack within the 48 hours.

Earlier, a Buddhist man, 55-year old Mong Shwe Lung Marma, was murdered by armed terrorists in Bandarban on Thursday night. The terrorists used machetes to kill him at Samshankhola.

Mong was an erstwhile ward-level Awami League leader and he died on the spot.

These killings have started a debate in India with BJP leader Subramanian Swamy expressing his anger at these killings.

Sheikh Hasina, Prime Minister of Bangladesh, considered close to the Indian government, has come under fire from the international community for her inability to control home-grown radical sepoys that have been targeting the minority communities without any fear of the law:

Y doesn't Mamata Banerji protest against attacks on Hindus in Bangladesh ? She appears silent on this. Secularism cannot be a 1 way traffic

Someone commented on my last fb post asking what can Mamata Banerji do when Hindus are attacked in Bangladesh ? Well, she can at least raise

her voice in protest against this. Or does she have no tongue ? Sherni geedarh ban jaati hai when Hindus are attacked

her voice in protest against this. Or does she have no tongue ? Sherni geedarh ban jaati hai when Hindus are attacked