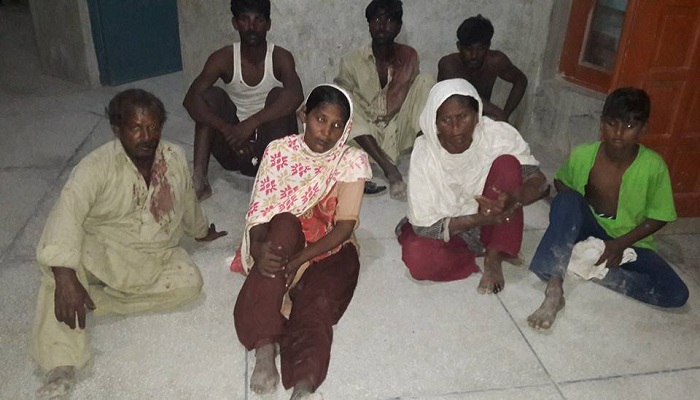 Anjum James Paul, Assistant Professor of Political Science and Head of Department at Govt. Post Graduate College Samundri, Pakistan brought the most recent attack on the Christian community to light.

The attack happened on the evening of September 16th and the named of the victims are Shahzad Masih, Zahid Masih, Hanif Masih, Arif Masih, Rabat Masih, Sharifan and Perveen Bibi. Attackers were drunk and beat up the victims as they were Christians and even women and children were thrashed by them.

Rev. Father Abid Tanveer had a Pastoral visit in the hospital on September 19 2016 to meet the attacked Christians. The police said that it would try and arrest the culprits soon.

Mian Waqas ul Haq advocate, a student in MA Political Science and legal advisor of the SHADOW ORGANIZATION has offered his services voluntarily to the Christian victims.

Doubts on the role of a Christian NGO

Just like the Hindu NGOs, the Christian NGOs also hardly come to truly help the victims. In this case too the Christian victims Arif Masih and Shahzad Masih had to appeal some people of an NGO who had taken away their original documents of the Referral Slips and dockets on the evening of September 18, 2016.

Due to this act by the NGO, they were unable to have their x-rays and to register the case in the police station Saddar Samundri.

However now, due to the pressure of the social media the NGO in question has returned the documents.

Anjum James Paul also said this on the role of the Christian NGO:

“The victims said that you took away their original legal documents without informing them. They have been delayed by your (this) act. We do not know what were the gains behind it. The victims have suffered a lot and yesterday in the evening I have managed to provide them documents by a great effort and difficulty. I have sent the victims to DHQ Hospital Faisalabad this morning. If you want to help them, please help the victims in the daylight but do not disturb by stealing their documents in the midnight by shooting photo sessions and uploading videos by threatening the marginalized Christians.”

The victims have hidden their clothes as they have fears of theft by people like you.

In short, the state of NGOs which operate  in Pakistan for the minorities is suspicious or perhaps they really cannot work without toeing the line of the state?

Christians are to convert all Muslims says top Vatican official