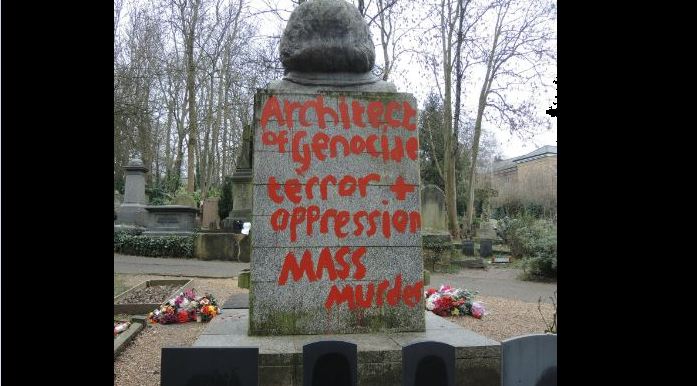 The grave of Karl Marx situated at the cemetery in north London has been vandalized again within a fortnight.

The 19th-century political philosopher’s grave was defaced with red paint this time while earlier it was damaged by vandals with a hammer.

The Highgate Cemetery which is one of England’s ‘finest’ Victorian burial grounds issued an exasperated statement clearly showing staff’s frustration. It said on February 16th, 2019:

Vandals back at Marx Memorial, Highgate Cemetery. Red paint this time, plus the marble tablet smashed up. Senseless. Stupid. Ignorant. Whatever you think about Marx’s legacy, this is not the way to make the point.

The vandals wrote slogans like “ideology of starving”, “Bolshevik holocaust”, accusing him of causing some ‘66 million deaths‘ and even called him the “Architect of genocide, terror + oppression, mass murder” in red paint.’

Take a look at the pictures below: