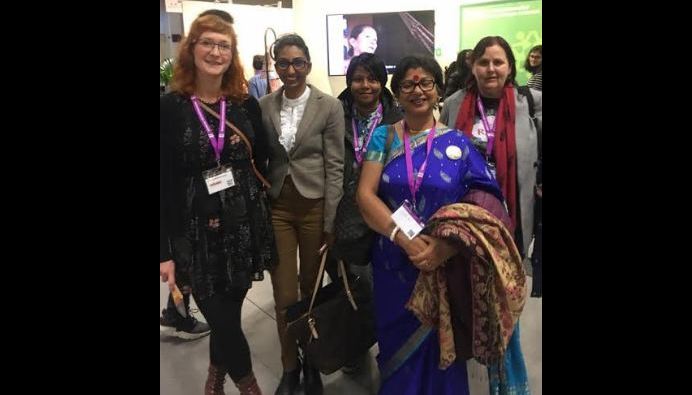 On November 17th, 2018, Hindu Forum Sweden raised the vice for persecuted minorities in Pakistan and Bangladesh in the Swedish Forum for Human Rights.

Radjnie Gowri from Global Human Rights Defence spoke at length over the issue and told the gathering that in Bangladesh and Pakistan, every month Hindu girls become victims of abductions, forced conversions and child marriages.

Gowri told the gathering that ever since the independence of both the countries Hindu women and girls suffer from severe human rights violations.

Even though forced religious conversions and child marriages are prohibited by law, the victims and their relatives are finding themselves in a helpless situation. Through examples, she described the problems that victim and victim’s families, mostly belonging to marginalized communities, are lacking access to justice. In many cases, facilitators and perpetrators are enjoying impunity. She was unequivocal that the government of both the countries has failed in protecting the rights of the religious minorities.

Chaity Rahman, a writer from Bangladesh also participated in the seminar as a panelist and gave a heart-wrenching statement saying that “silent ethnic cleansing and oppression against Hindu minority is not a new issue at all. It has a long history’

Rahman also said that the abduction, forced conversion, rape, target killing, spreading rumours in Facebook against Hindus and collective attack against the Hindu minority are taking place in Bangladesh.

“It seems that this is a tradition in Bangladesh and no special concern should be given in this matter. The mass is accepting these phenomena easily and they are not vocal about this abnormal situation of their very own society.”

Hindus in Bangladesh are at the receiving end due to its Hindu-majority neighbour India.

Rahman said these happen to be the most common questions for a Hindu friend from their Muslim friends in Bangladesh which, she said, clearly lay bare the mentality of the majority.

Rahman expressed sadness and said that since the partition of 1947 ‘our Hindu friends are facing these questions while they are living in their very own country. These communal questions are still alive in Bangladesh even after the independence from communal Pakistan in 1971 with a secular constitution declaring equal rights for all.’

Bangladesh Hindus: From The Devil Into The Deep Sea

Chaity Rahman was clear in the path ahead for Bangladesh’s society. She said that a transformation is needed and that the social stereotypes against the minorities need to be challenged.

“The law enforcement agencies and the judiciary must stand with the minority. In the long run, we must reform our education system as a progressive non-communal humanitarian one so that our children can think beyond the communal mindset of the mass.”

Hindu Forum Sweden President Chitra Paul has vowed to continue to raise the voice of the discriminated communities across the world.