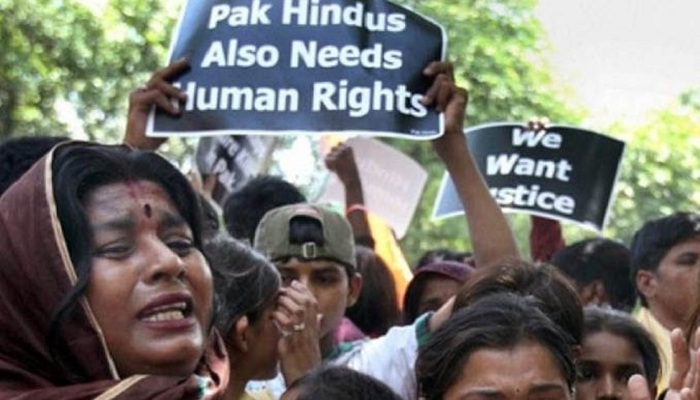 In a damning report of Associated Press, published by news outlets across the globe, sexual slavery of young underage minority girls of the Hindu community has again come to light.

The report specifically takes up the case of a 14-year old Hindu girl who was snatched to settle off a debt of his family.

Hindu girl Jeevti was a mere 14-year old when she was snatched from her family in the night and ‘married’ off to a man much older as her family owed her USD 1000, says the AP report.

Many Hindu families in Pakistan live in abject poverty as there are no special programs to alleviate their status and many work as bonded labours barely getting enough to eat. At currentriggers.com we have reported extensively on the state of Hindus and Christians in Pakistan.

The enslavement of a Hindu girl, a victim like thousands of others:

As per the report, Jeevti’s family had once borrowed a loan of USD 500 to work on their land which multiplied and Jeevti had to pay off that accumulated debt with her life.

She was converted to Islam despite being a minor and became the second ‘wife’ of the man named Brohi who snatched her not only from her family but also from her childhood as well. After conversion to Islam one cannot revert back and most girls who are converted seldom stay in touch with their families under pressure as they turn ‘Muslim’ while the families are ‘still non-Muslims.’

‘Your daughter has committed to Islam and you can’t get her back.’

Is pedophilia legal in Pakistan? It certainly is when the victim is a helpless minority girl who cannot even fight a system where discrimination is part and parcel of life.

Jeevti’s mother Ameri is a poor Hindu woman but she says that the family repaid the loan, but still they failed to stop the man from taking away their daughter.

In the southern part of Pakistan, the AP report grimly states the obvious:

In this world, women like Ameri and her young daughter are treated as property: taken as payment for a debt, to settle disputes, or as revenge if a landowner wants to punish his worker. Sometimes parents, burdened by an unforgiving debt, even offer their daughters as payment.

Jeevti’s mother went to the police and the court but no help came as she is a Hindu, worse a very poor one.

At least 1,000 young Christian and Hindu girls, most of them from poor houses, are snatched from their families every year, converted to Islam and married, said a report by the South Asia Partnership organization. Jeevti is one of the many victims who would never get justice in Pakistan.