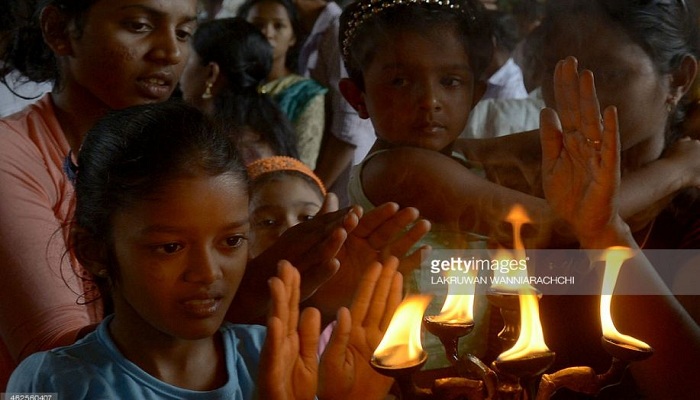 Sri Lankan Hindus angered by conversion bids by Buddhists, Muslims and Christians have formed a group Siva Senai to counter them.

This group been formed to help the Sri Lankan Hindus in facing threats from other religious groups, says Maravanpulavu Sachchithananthan, the man behind the group.

Maravanpulavu Sachchithananthan is a Tamil nationalist and a former UN official.

The New Indian Express has reported the news and has quoted him as explaining that Siva Senai is “based on the ancient Tamil dictum that all thought, word and deed should be based on Anbu (Love), Aram (Morality or Religion) or Arul (Grace). We will adopt the path of dialogue in resolving issues with other religious groups and take to action if necessary.”

Sri Lankan Hindus want to save religion but what about Tamil unity sans religion?

Maravanpulavu Sachchithananthan underlined the objective of Siva Senai in these words:

Our first objective is to stop conversion. We are for safeguarding Hindu temples from encroachments by other religions. For instance there is a huge church in front of the ancient Thiruketheeswaram temple in violation of an agreement entered into in the 1960s. In Mannar and Mullaitivu we face challenges from the Catholics and in Vavuniya it is from the Buddhists who are colonizing through the imposition of Buddhism. In the Eastern Province the Hindus face threats from Muslims.

When he was asked by The New Indian Express correspondent to comment on the impact this would have on Tamil unity, he lamented that:

For 60 years the Hindus of Sri Lanka have sacrificed their interest at the altar of Tamil unity and that cannot go on. The leadership of the Tamil movement has been dominated by Christians. Many in India would ask me if the Tamils of Sri Lanka are Christian!

Siva Senai plans to get Sri Lankan Hindus their rights and end the dominance of the Christians. He said that in Mullaitivu (with 85% Hindu population), Christian candidates are pushed on them.

He is hoping that India and Tamil diaspora will help the new organization as it is trying to push for Sri Lankan Hindus rights.

Madhavan played this brave journalist in the hit film Guru!