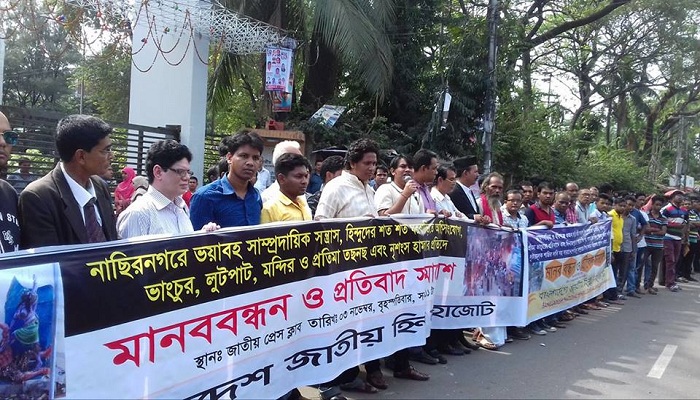 Hundreds of Bangladesh Hindus marched in protest against atrocities that they have been facing since Diwali days.

This demonstration was organized by Bangladesh Jatiya Hindu Mohajote against the murderous attacks by Islamists in the nation who attacked the vulnerable Hindus over a rumor of sharing a Facebook post that allegedly had the picture of Hindu God Shiva over Muslim religious place Kaba.

Due to this Muslim mobs went on a rampage and attacked about 300 Hindu family at Nasirnagar Upazila of Brahmanbaria District on 30 October’2016.

The attacks were closely coordinated and Hindus were forced to flee their houses. More than a dozen Hindu Temples were attacked and the statues of Gods were desecrated while there are news’ that suggest that women and children were especially targeted by Islamists to still maximum fear.

Jago Hindu Parishad (JHP), Sanatan Vidyarthi Sangsad (SVS) and other Hindu Organization joined the protest and demanded that the perpetrator Muslims be brought to justice and said that the protest marches would continue.

Hindu groups took this demonstration out from the National Press Club, Dhaka and demanded that the security of the Hindu community be made a priority by the Sheikh Hasina government.

The ‘fake rumor’ business smacks of Bangladesh turning into another Pakistan

In Ghotki, Pakistan, a man burned Quran after which the Sufi Pirs of the Bharchundi Sharif spread the rumor that Hindus were behind the desecration. In no time, Hindu houses were attacked, a 16-year old Hindu girl was carried away by the rioters never to return, and 1 teenager lost his life. Later, it was revealed that the man in question was a mentally unstable Muslim man who did the blasphemy but the price was paid by the minority, even when the crime was done by the majority. Has Bangladesh finally turned into another nightmare called Pakistan? This is the question that the Freedom Fighters of Bangladesh must think over, because if this is what they wanted and dreamed  when they took an aggressive Islamist Pakistan in 1971, then this pretty much is a failure of their efforts.