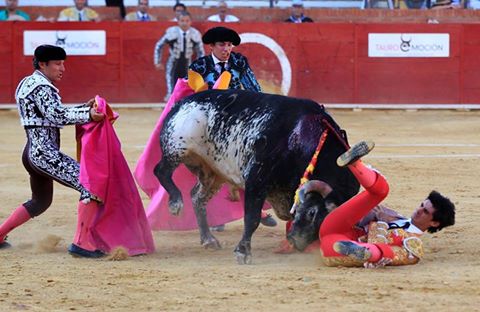 This letter is written by Captain Paul Watson in memory of the bull Lorenzo, but actually describes his pain over the many bulls who get killed in pain in the name of sport.

In Memory of Lorenzo, the Doomed but Victorious Gladiator

For the first time in 25 years, a Spanish matador has died in the bullring.

His shocked wife watched from the crowd of “horrified” fans as the bull’s horn pierced her husband’s lung and severed his aorta.

She wept and lamented that “life is unfair” in response to his death.

As unfair as it may have been for Barrio, life is certainly exceedingly more unfair for Lorenzo and a thousand other bulls that will die this summer to satisfy the blood lust of the sadistic crowds that support this horrendous festival of blood, gore and pain.

Lorenzo’s victory over Barrio did not save his life and the Spanish bull-fighting syndicate exacted further revenge by immediately sending Santa Coloma, the mother of Lorenzo to slaughter, thus ending his bloodline. The newspaper El País reported, “as tradition dictates, the “murderer’s” lineage ends with him.”

Matador Francisco Marco was also gored in Pamplona on Saturday.

On Friday 16 idiots were injured in Pamplona with the running of the bulls. Two more were gored on Saturday in Pamplona and also on Saturday a 28-year old man died in the bull-run in the Spanish town of Alicante.

Yes, it is sad that Barrio died and yes it is sad that 18 people were injured (2 critically, one mortally) in Pamplona and Alicante. I am not glad that the matador and an idiot died nor the 17 other macho fools were injured, but I can’t say that I’m sad or sorry.

What bothers me is the injustice for Lorenzo. Slain if he loses, slain if he wins, plus the slaughter of his mother. The Spanish media actually brands a bull a murderer if he wins and glorifies the serial killing sadistic narcissists called matadors if they win or lose, and for every matador that dies on the horns of a bull, thousands die from the sword of the matador.

This is not a sport, it is a bloody archaic slaughter for thrills stemming from the ancient Roman circus days of the bestiarii gladiators. It is not a sport if one side, the bull, is tortured before being killed and has no chance of living, win or lose.

It is brutal, vindictive, vengeful and sadistic and to label a sentient being defending himself as a murderer is a repulsive anthropocentric conceit.

Barrio died because he made the decision to pit himself against a bull whose testicles were being crushed and whose blood was oozing from multiple wounds inflicted by the cowardly picadors. Maddened with pain and fearful of the roaring crowd, Lorenzo managed nonetheless to strike a blow for his species. He killed one of the heartless monsters tormenting him, and I for one celebrate his achievement.

Lorenzo is dead but we need more victories by the bulls until this madness is ended and the torture is no more.

A hundred years ago no one would have cheered the death of a matador. But this is not 1916, it is 2016, and this despicable murderous macho charade of courage has no place in the world anymore. Matadors need to be tossed into the dustbin of history along with gladiators, bestiarii, bear baiters, dog fighters, grind masters and cock-fighters.