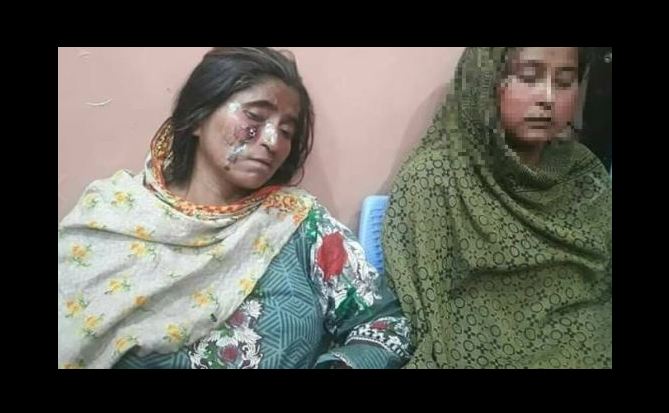 Holi turned tragic for Pakistani Hindus as two minor girls were forced to convert to Islam in Pakistan on the eve of the holy Hindu festival and were married off.

While Pakistani Hindus were on street fighting on this case, Currentriggers.com came to know that another Hindu woman named Taran Bai was attacked with sharp objects for resisting molestation bid a day before Holi.

Taran Bai who belongs to the vulnerable Baghri community was at her home when some perpetrators tried to kidnap her and on resisting they tried to mutilate her face to teach her a lesson.

She was rushed to a hospital bleeding where the Doctors turned down the request to give her medical aid because the perpetrators are influential Muslim locals.

Pakistani Hindus are organizing a protest in front of Karachi Press Club on Sunday at 4 pm against media’s silence over the forced conversion of Hindu girls.

Police have not bothered to even register an FIR in the case of Taran Bai.

Lack of Pakistani media’s interest in these human rights abuse cases is one of the reasons why sexual grooming of young Hindu women and underage girls is simply unchallengeable with even police cooperating in the conversion of minorities. Hinduphobia, in short, has become difficult to contain due to no ground-work done by human rights officials and no interest shown by Pakistani media personals while others have turned deaf and mute to the pleas of the vulnerable Hindus.

Just like the case of the Hindu Baghri woman Taran Bai, one Hindu girl named Sonia, aged 15 was also kidnapped just days before Holi. The Hindu girl is said to be mentally challenged but this could not save her from forced conversion attempt and her family is still fighting to bring the daughter back.

On March 10th, Sonia was going with her mother when a ‘Pathan’ looking man attacked her and put her in a car even as the minor girl and her mother kept pleading with the attacker.

In all these cases, the Hindu women come from extremely poor families. Sonia and her mother used to do odd jobs to make two meals a day. Hindu community members fear that even when the girl is mentally-challenged, her forced conversion will not be reversible as apostasy and disrepute to Islam is frowned upon by the Pakistani society.

#SoniaMeghwar's mother wants her daughter returned. The person who interviewed her has done a huge service to mankind. pic.twitter.com/abw0t6clrj

Due to religious persecution and sexual grooming India was forced to devise a Citizenship Bill to provide relief to the victims fleeing Pakistan.

Dear readers, your support is crucial for our work. Like and share from us every day and strengthen us: