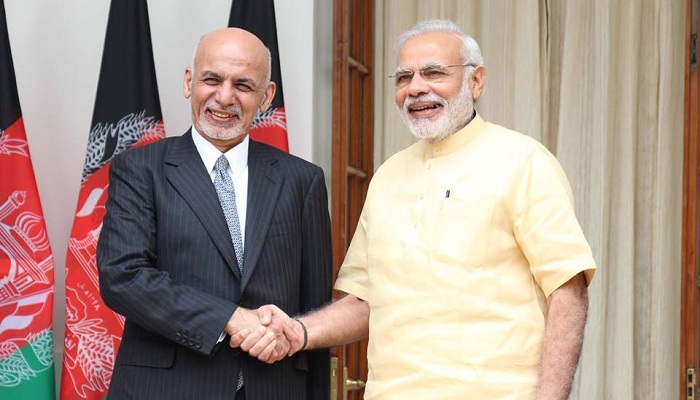 The President of the Islamic Republic of Afghanistan Dr. Mohammad Ashraf Ghani was in India on 14 and 15 September 2016.

He held discussions with Prime Minister Narendra Modi on the many issues of cooperation.

But what is truly heartwarming is the way India and Afghanistan have started engaging with each other not on the basis of politics but cooperation on the basis of true friendship. While politically it is important that the two victims of terrorism join hands yet it is indeed wonderful that they have not allowed their many wounds to dictate their relationship. The relationship between Afghanistan and India is based on positivity and is not the result of trying to contain a third party.

India and Afghanistan denounced terrorism but they did not allow Pakistan’s shadow to overpower them. In fact, if we see closely, we find that the two share relations based more on the human rights than anything else.

Consider the milestones in the Indo-Afghanistan relations; building the Parliament building, the Afghanistan-India Friendship Dam and joint inauguration of the Storay Palace on 22 August 2016 and the assurance that the 1.25 billion people on this planet stand behind their Afghan brothers and sisters.

This cooperation between a Muslim republic and a Hindu-majority secular state is in itself commendable and shows that religion is not what brings either the people or the nations together. If it were, then Pakistan wouldn’t have tried to conquer Afghanistan and subjugate it through the backdoor terrorism. The many atrocities that Afghan men, women, and children faced at the hands of the nefarious neighboring force and how it destroyed the once heavenly Afghanistan should remind Indians of what Pakistan did in Kashmir and how the innocent Kashmiri Hindus were slaughtered and thrown out of their homes. The pain that an Afghan feels for his homeland and the destruction of his people and culture is felt by an Indian too, who saw a similar genocide in Kashmir, but this shared pain has made the two nations cement their ties and take up the challenges head-on.

Afghanistan President also got an assurance of $1billion from India. But seeing that Afghanistan needs quality medical care in affordable amount, India has proposed to help the nation with that.

India will also help Afghan people realize their true potential and has proposed to help them in the realm of education, health, agriculture, skill development, cooperation in harnessing solar energy, empowerment of women, energy, infrastructure and strengthening of democratic institutions.

This will help Afghan population to reclaim their country from the clutches of terrorists who take dictations from Islamabad.

But again, let this be more important that the relations between the two nations be based on mutual respect, respect for each other’s sovereignty and of course, human rights.