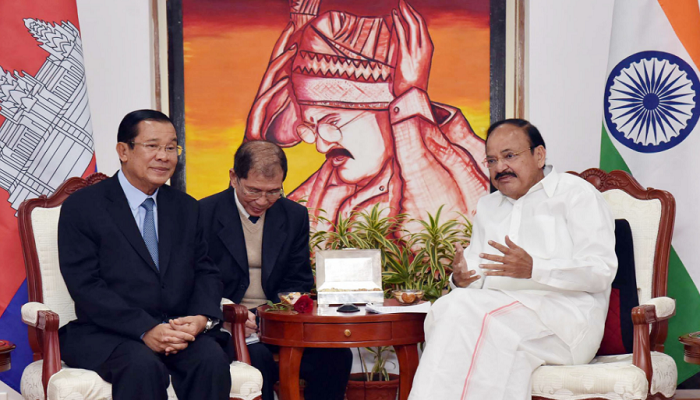 The Vice President of India, M. Venkaiah Naidu has said that India is committed to provide all support to the agricultural sector in Cambodia, which has a great potential. He was interacting with the Prime Minister of Cambodia,  Samdech Akka Moha Sena Padei Techo Hun Sen, in New Delhi on 27th January 2018. Senior officials from Cambodia and India were present on the occasion.

The Vice President recalled fond memories of his personal visit along with his family to the Angkor Wat temple complex in Cambodia few years back, which is the largest religious monument in the world. He further said that India is committed to continue its assistance in capacity building, developmental and social projects as well as preservation of historical and cultural heritage of Cambodia and the restoration and conservation of Angkor Wat temple and the continued work by Archaeological Survey of India at Ta Prohm temple was an evidence for the same. India is proud to become the co-chair of International Coordinating Committee for Safeguarding and Development of the Historic Site of Preah Vihear, he added.

The Vice President appreciated Cambodian government for the remarkable economic growth of over 7% consistently year after year in the last two decades. He further said that the economic developments in our two countries present opportunities for greater commerce and investment. Hope Cambodia will provide easy access to the Indian professionals, businessmen and service providers, he added.

The Vice President said that Indian Chair for Buddhist and Sanskrit studies at Preah Sihanouk Raja Buddhist University further deepens the interactions and understanding between our scholars. He further said that a project development fund with a corpus of 75 million US Dollars for catalyzing Indian investment in CLMV countries is created. Our EXIM Bank teams are conducting feasibility studies in the region including Cambodia to identify potential sectors, he added.

The Prime Minister of Cambodia has recalled the assistance provided by the Indian Government during it’s difficult times. He invited the Vice President to make a state visit to Cambodia at his convenience.

The family members of the Vice President welcomed the visiting Cambodian Prime Minister with a traditional Pochampally Shawl.