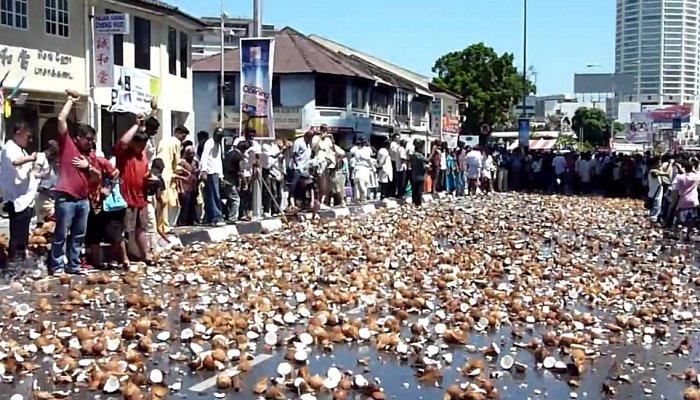 In Penang, Malaysia, the Consumers’ Association of Penang (CAP) has called for less breaking of coconuts after last year’s Thaipusam where about 400,000 broken coconuts were found with their flesh intact.

CAP education officer NV Subbarow is quoted by the Free Malaysia Today as saying that since breaking more coconuts mean more luck hence people take it with gusto during Thaipusam. He also said that this year’s coconut breaking could be higher despite a higher price tag on the coconuts.

He added that when a devotee breaks coconuts in front of Lord Muruga, sitting on the chariot, in effect, they are tearing down their egos or requesting God to help them in escaping from the shackles of the egos.

Subbarow is also quoted as saying that “broken coconuts were traditionally collected and the flesh either eaten raw or used in cooking, but when too many are broken, they end up as waste, especially in Penang. They break thousands of coconuts every year which end up in the landfills, and which are then burned causing fumes which pollute the environment. Can this be favored by God?.”

This year Thaipusam is falling on 31st January.