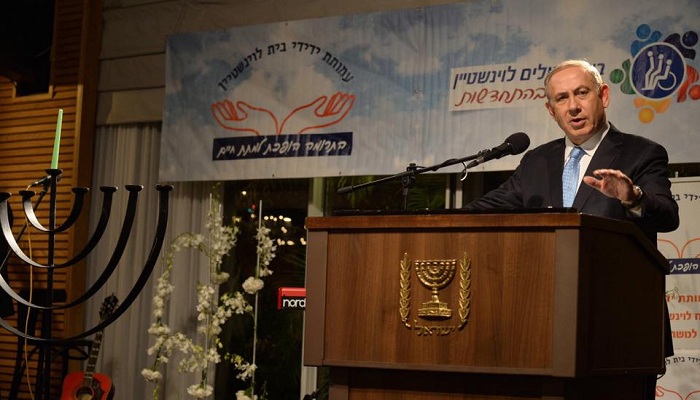 In a strongly worded statement after the UN adopted a resolution critical of Israel, the Prime Minister of Israel, Benjamin Netanyahu released a statement where he has explicitly criticized the Barack Obama regime for what he said was an ‘anti-Israel’ plot.

Benjamin Netanyahu also said that he is confident that the incoming Trump administration will not allow anyone to harm Israel.

This is the full statement of the Prime Minister of Israel:

“Citizens of Israel, I would like to reassure you. The resolution that was adopted yesterday at the United Nations is distorted and shameful but we will overcome it. The resolution determines that the Jewish Quarter in the Old City of Jerusalem is ‘occupied territory’. This is delusional.
The resolution determines that the Western Wall is ‘occupied territory’. This too is delusional. There is nothing more absurd than calling the Western Wall and the Jewish Quarter occupied territory. There is also an attempt here, which will not succeed, to impose permanent settlement terms on Israel. You might recall that the last one who tried to do this was Carter, an extremely hostile president to Israel, and who just recently said that Hamas is not a terrorist organization. Carter passed sweeping decisions against us at the UN of a similar kind, and this was also unsuccessful. We opposed this and nothing happened.
All American presidents since Carter upheld the American commitment not to try to dictate permanent settlement terms to Israel at the Security Council. And yesterday, in complete contradiction of this commitment, including an explicit commitment by President Obama himself in 2011, the Obama administration carried out a shameful anti-Israel ploy at the UN.
I would like to tell you that the resolution that was adopted, not only doesn’t bring peace closer, it drives it further away. It hurts justice; it hurts the truth. Think about this absurdity, half a million human beings are being slaughtered in Syria. Tens of thousands are being butchered in Sudan. The entire Middle East is going up in flames and the Obama administration and the Security Council choose to gang up on the only democracy in the Middle East – the State of Israel. What a disgrace.
My friends, I would like to tell you on the first night of Chanukah that this will not avail them. We reject this resolution outright, just as we rejected the UN resolution that determined that Zionism was racism. It took time but that resolution was rescinded; it will take time but this one will also be rescinded. Now I will tell you how it will be rescinded. It will be rescinded not because of our retreats but because of our steadfastness and that of our allies. I remind you that we withdrew from Gaza, uprooted communities and took people out of their graves. Did this help us at all at the UN? Did this improve our relations at the UN? We were hit with thousands of rockets and at the UN we were hit with the Goldstone report!
So I will tell you what is clear, I know, to the vast majority of Israeli citizens: We learned this lesson, and we will not go there. But I also want to tell you something else: We are not alone. I spoke last night with many American leaders. I was pleased to hear from members of the American Congress, from Democrats and Republicans alike, that they will fight an all-out war against this resolution with all the power at their disposal. I heard the exact same things from our friends in the incoming administration, who said that they will fight an all-out war against this resolution. And I heard this from across the spectrum of American public opinion and American politics – Republicans, Democrats, Jews and non-Jews. As I spoke yesterday with leaders in Congress and the incoming American administration, they told me unequivocally: ‘We are sick of this and it will not continue. We will change this resolution. We will not allow anyone to harm the State of Israel.’

They are declaring their intention to pass legislation to punish countries and bodies that try to harm Israel. They say that this will also include the UN itself. I remind you that the UN receives a quarter, 25%, of its budget from the US alone.

In my most recent speech to the UN, in September, I said that a storm was expected in the UN before it gets better there. We knew that this is possible and we expect that it will come. The resolution that was passed at the UN yesterday is part of the swan song of the old world that is biased against Israel, but, my friends, we are entering a new era. And just as President-elect Trump said yesterday, it will happen much sooner than you think. In the new era there is a much higher price for those who try to harm Israel, and that the price will be exacted not only by the US, but by Israel as well.

Two countries with which we have diplomatic relations cosponsored the resolution against us at the UN; therefore, I ordered yesterday that our ambassadors be recalled from, Senegal and from New Zealand. I have ordered that all Israeli assistance to Senegal be halted, and there’s more to come.

Those who work with us will benefit because Israel has much to give to the countries of the world. But those who work against us will lose – because there will be a diplomatic and economic price for their actions against Israel.

Additionally, I have instructed the Foreign Ministry to complete, within a month, a reassessment of all of our contacts with the UN, including Israeli financing of UN institutions and the presence of UN representatives in the country.

But I am not waiting; already now I have ordered to halt approximately NIS 30 million in financing for five UN institutions, five UN bodies that are especially hostile to Israel. I have already ordered that this be stopped, and there is more to come.

We are on a campaign of improving our relations with the nations of the world. And it will take more time, and I have said this as well, until our improved relations with countries on five continents are also reflected in their decisions in UN institutions. But I would like to tell you something else, and listen closely to what I’m saying. Contrary to what you might expect, it is very likely that last night’s scandalous resolution will accelerate this process, because it is the straw that broke the camel’s back. Last night’s resolution is a call to arms for all of our many friends in the US and elsewhere around the world, friends who are sick of the UN’s hostility toward Israel, and they intend to bring about a fundamental change in the UN. Therefore, this evening I tell you in the language of our sources, the sweet will yet come forth from the bitter and those who come to curse will yet bless.
Here, on the first night of Chanukah, I stand next to the Maccabees of our times, IDF soldiers and wounded IDF heroes. I salute you and I say to you clearly: The light will dispel the darkness. The spirit of the Maccabees will overcome. Happy Chanukah.”

Donald Trump clearly is on the side of Israel:

The big loss yesterday for Israel in the United Nations will make it much harder to negotiate peace.Too bad, but we will get it done anyway!