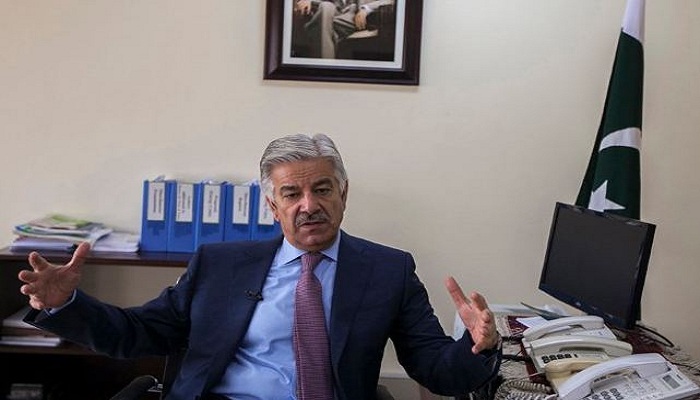 Pak Defence Minister Khawaja M.Asif’s love for nukes is not unknown. He like many others like to boast of the nukes as if they are playthings. This time, however, he became a butt of jokes after he threatened Israel with nukes.

Pak Defence Minister took to Twitter to issue the threat to Israel and wrote:

He is the same guy whose pants dropped in public earlier. Check the video below:

Pak Defence Minister’s statement was denied by Israel’s Ministry of Defence which told him:

The statement attributed to fmr Def Min Yaalon re Pakistan was never said. Reports referred to by the Pakistani Def Min are entirely false.

In its Hebrew tweet, the handle told the Pak Defence Minister:

“Statements attributed to former Defense Minister Ya’alon regarding Pakistan has never spoken The report referred to by the Pakistani defense minister is entirely fictitious.”

But soon people took to Twitter to slam the Pak Defence Minister. Here are the best reactions:

@KhawajaMAsif @Terry_G_Bollea I thought pakistan has no roll In syria wrong again you muppet.

@World_News_Hour @KhawajaMAsif Ok. It's a fake news site. A bit troubling that you don't know Moshe Yaalon is no longer Israeli defense Min

@ajzaza1231 @KhawajaMAsif he is not PM of Pakistan !! He is a stupid minister who doesn't know when to keep his mouth shut

But if you thought that this behavior is new to Pakistan and restricted to the Pak Defence Minister, then you are wrong. Bilawal Bhutto Zardari of the Pakistan Peoples party is no less funny when he likes to talk about India and Israel. In one of his diatribe, he got so carried away that he ended up making Israel, Israle!

Another attack on LOC. seems India adopting Israle model vs Pakistan.Modi must realize we can retaliate unlike his victims from Gujarat.

What is worse? That both of them, despite being made of and told repeatedly about their mistake refused to delete the tweet, apologize, or at least correct their mistakes.