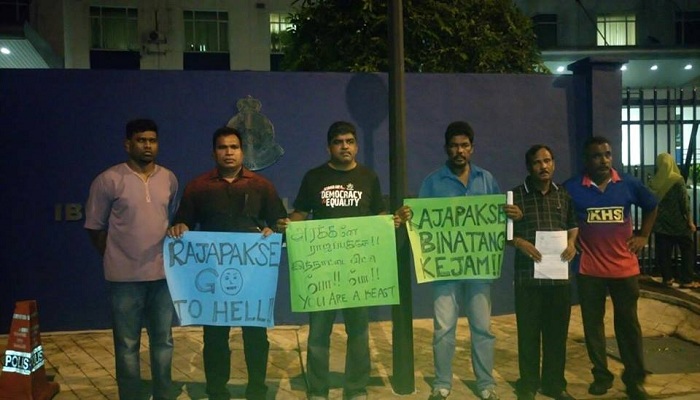 The attack on the Sri Lankan diplomat, Ibrahim Sahib Ansar, to Malaysia was touted as an attack by LTTE sympathizer in the press. But was it exactly that?  The Sri Lankan diplomat was assaulted when he was at the Kuala Lumpur on Sunday while Mahinda Rajapaksa was visiting the nation. Following the attack, Malaysian High Commissioner was summoned by Sri Lanka to seek details.

It is being said that when the assaulters came to the Sri Lankan diplomat and asking him about the ‘war criminal Mahinda Rajapaksa’ the diplomat replied that ‘they must go to the security to find out’ following which he was beaten up.

However, now a new angle has surfaced which shows that perhaps we need deeper investigation in the incident.

Prof. Dr. Ramasamy, Penang Deputy Chief Minister, issued a statement after his press conference in Komtar, Penang in which he alleged that all was not as clear as was being made out to be. In fact, he alleged that while he will not stand by the violence yet, there were reliable reports that claimed that the Sri Lankan High Commissioner to Malaysia, Ibrahim Sahib Ansar, has provoked the young protesting men by saying that:

“We will wipe out the Tigers in Malaysia as we wiped out the LTTE in Sri Lanka.”

Why this charge against him was not being investigated shows the complacency on the part of the Malaysian government that is unwilling to allow the other side of the story to be investigated.

In the press release for the media, Prof. Dr. Ramasamy even said that Ibrahim was in Malaysia for a job; he was sent to “gather information of the activities of the Tamils especially those who are in support of the creation of independent Tamil Eelam, a separate state for Tamils in the north and east of Sri Lanka. In the last few years, he was responsible for coordinating information about Tamil refugees coming into the country and passing them to the Malaysian police. As a result of the nefarious activities of Ibrahim a number of Tamil refugees have been deported back to Sri Lanka by the Malaysian authorities to face detention, torture and lengthy imprisonment in Sri Lanka.”

Prof. Dr. Ramasamy demanded the expulsion of the Sri Lankan diplomat but the question is that why was Malaysia so eager to pander to one side of the story? What purpose would it serve to brand a group of peaceful protestors as those sympathetic to the LTTE? It was clear that the protests against Mahinda Rajapaksa were from the ordinary Tamil groups and there was no reason to see it as the sign of ‘resurgence of the LTTE’ in Malaysia!

Malaysia worried about LTTE should first worry about ISIS

Mahinda Rajapaksa visit to Malaysia was expected to be a volatile affair but why is Malaysia eager to talk tough on the defunct non-existent LTTE while it keeps claiming that ISIS has no presence in the nation?

Not only many Hindu Temples have been desecrated, but recently 3 Malaysian ISIS members were arrested who were planning an attack on the famous Hindu Temple in the Batu Caves. Malaysia has vehemently denied that any ISIS sympathizers live in its territory, but yet, it was more than eager to take the charge that LTTE sympathizers thrive in the nation!

IGP, Khalid Abu Bakar, a modern-day Don Quixote, who expressed these apprehensions about the Malaysian ‘LTTE’ sympathizers should instead come clean with both the sides of the story well investigated and work towards the elimination of the radicals who are trying to turn Malaysia in another IS territory.

Imaginary enemies are the last thing that Malaysia should want at this stage. Isn’t?