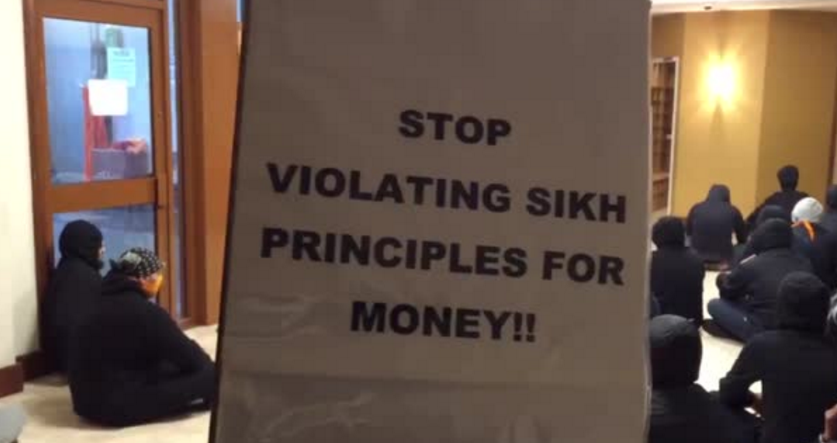 A mixed wedding led to the tensions in a Gurudwara when a group of men barged into it to protest against the ceremony. 55 people have been reportedly arrested after what is being described as a ‘siege’ of the Gurudwara Sahib in the Leamington Spa in the UK. Sikh Youth Birmingham took responsibility of the protest and has claimed that it was a peaceful protest undertaken by it to ensure the sanctity of the traditional marriage ceremony.

Sikh woman was to marry a non-Sikh man at the Gurudwara.

The identity of the non-Sikh man or the girl he was wedding has not come to light.

British media raised an alarm as it said that many men were seen entering the vicinity with swords in their hands. It seemed that the men were carrying traditional daggers, but they too have been seized by the British police.

The siege began at 6.45 am on Sunday and lasted till 2 pm during which the group of protesters chanted their religious slogans.

Sikh Youth Birmingham posted the video of their protest and one of the placards read as ‘stop violating Sikh principles for money.’

The siege has led to speculations and many were worried about the law and order situation but it seems that with the intervention of the British authorities this was resolved. Mixed weddings are part of the British culture:

A number of arrests made on suspicion of aggravated trespass following incident at Gurdwara Leamington Temple. More to follow.

Many netizens initially were unhappy of the armed police officers tackling the protesters but the police have reasoned that this was done as the said protesters were in possession of blades. Here is the statement:

“Officers responded to an initial report of a group of masked men, initially thought to be around 20 in number, forcing their way into the Gurdwara Temple. These were reported to be carrying a range of bladed items some of which were initially described as not being for ceremonial use. Officers assessed the situation and responded accordingly. Having contained the situation, it became apparent that there were 55 masked men involved, all of whom were arrested on suspicion of aggravated trespass. Blades seized so far have been ceremonial. Another non-ceremonial weapon was seized. This is an ongoing investigation and we will be investigating the initial report that other weapons were involved.”