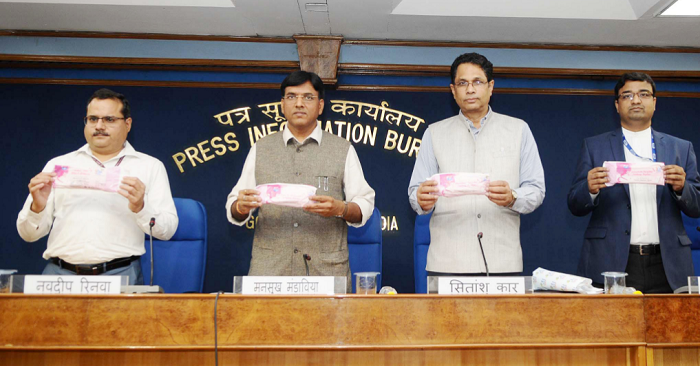 Mandaviya said that this is a special gift for all Women on the eve of World Environment day, as this unique product would ensure Affordability, Hygiene as well as Ease of use and disposal for them. Jan Aushadhi Suvidha comes with a special additive, which makes it biodegradable when it comes in contact with oxygen after being discarded. This would ensure ‘Swachhta, Swasthya and Suvidha’ for the underprivileged Women of India and go a long way in the achievement of Prime Minster Narendra Modi’s vision of Affordable and Quality Healthcare for All, the Minister added.

Emphasizing upon the affordability aspect of SUVIDHA, Mandaviya said that the average price of sanitary napkins available in the market today is around Rs. 8 per pad, whereas now with the launch of the SUVIDHA Sanitary Napkin at Rs. 2.50 per pad, this will go a long way in making the basic hygiene requirement aid for Women affordable for the underprivileged sections.

Mandaviya noted that Sanitary Napkin is one of the most important requirement in ensuring the Health Security to that section of Women in India who still use unhygienic aids during menstrual period due to non-affordability of some of the popular brands of sanitary napkins available in the market today. Such unhygienic aids cause fungal infections, Reproductive Tract Infection, Urinary Tract Infection, Cervical cancer and also make women vulnerable to infertility.