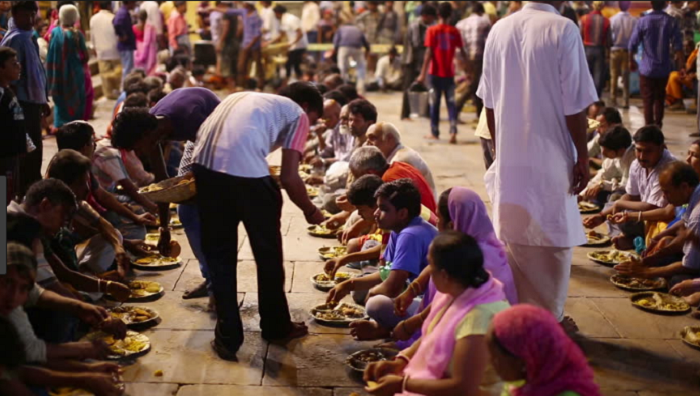 Taking into account growing demand for not imposing GST on eatables/Prasad/Bhandara/Langar at religious places, the Central government has started a scheme which seeks to reimburse Central Share of CGST and IGST on items for Food/Prasad/Langar/Bhandara offered free of cost by Charitable Religious Institutions.

The scheme envisages to reimburse the Central Government share of Central Goods and Services Tax (CGST) and Integrated Goods and Service Tax (IGST) on purchase of raw items such as ghee, edible oil, atta/maida/rava/flour , rice pulses, sugar, burra/jiggery etc which go into preparation of food/Prasad/langar/bhandara offered free of cost by religious institutions. The objective of the scheme is to lessen the financial burden of such Charitable Religious Institutions who provide Food/Prasad/Langar (Community Kitchen)/Bhandara free of cost without any discrimination to Public/Devotees.

The Charitable Religious Institutions such as Temples, Gurudwara, Mosque, Church, Dharmik Ashram, Dargah, Matth, Monasteries etc. which have been in existence for at least five years before applying for financial assistance/grant and who serve free food to at least 5000 people in a month and such institutions covered under Section 10( 23BBA) of the Income Tax Act or Institutions registered as Society under Societies Registration Act ( XXI of 1860) or as a Public Trust under any law for the time being in force of statuary religious bodies constituted under any Act or institutions registered under Section 12AA of Income Tax Act shall be eligible for grant under the scheme.

How will it work?

Ministry of Culture will register the eligible charitable religious institutions for a time period ending with finance commission period and subsequently the registration may be renewed by the Ministry, subject to the performance evaluation of the institutions. The details of registered institutions will be available on an online portal for the viewership of public, GST authorities and entity/institution itself. The entity/institution will be permitted to submit the reimbursement claim of the GST and Central Government share of IGST to designated authority of GST Department at State level in the prescribed format during the validity of registration. It would be the responsibility of the institutions/entity to intimate the Ministry about any changes being made in Memorandum of Association, Office bearers or addition / deletion of the location of the free food services.

All the eligible institutions should be registered with Darpan portal. All applications along with supporting documents received from the institutions in the Ministry shall be examined by the committee constituted for the purpose within 4 weeks and on the basis of the recommendation of the committee, competent authority in the Ministry shall register charitable religious institutions for reimbursing claim of CGST and Central Government share of IGST paid on above mentioned specific items.

Records relating to investigation into the Nirav Modi and Mehul Choksi case burnt? Know the truth!