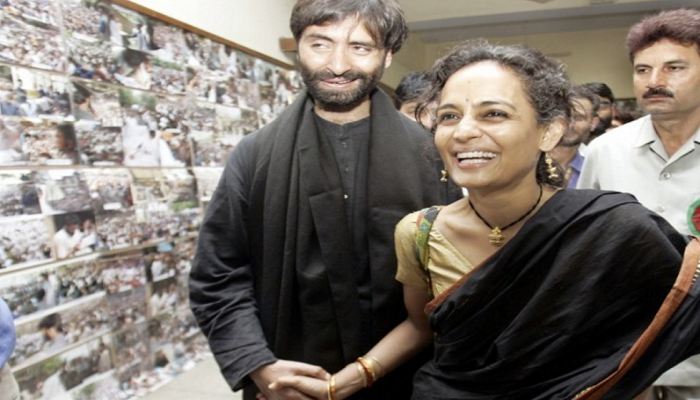 Renowned writer Arundhati Roy may soon get invited to Punjab Assembly if the MPA Sheikh Allauddin’s suggestion is implemented upon.

Sheikh had suggested that Arundhati Roy must be invited to raise voice against alleged atrocities in Indian Kashmir.

His suggestion drew much applause as even the Labour and Human Resource Minister Raja Ashfaq Sarwar agreed and said that the Foreign Office must look into it, and see if Arundhati Roy can be invited.

On Thursday, yet again, Punjab Assembly had expressed its solidarity with the Kashmiris, not the ones that are under its dominion, but those who enjoy better rights across the border.

Arundhati Roy and Barkha Dutt are leading names in Pakistan and even Hafiz Saeed, a world-famous Pakistani terrorist, had called the latter ‘good.’

Naturally, an angry Barkha retaliated calling Hafiz Saeed everything from a terrorist to accusing him of using her work to further his propaganda.

Repulsed by Hafiz Saeed trying propaganda points on my work. None of your business. You'e a terrorist. That you're free is Pakistan's shame

Hafiz Saeed-stop hiding behind Lashkar terrorists like a coward &using Indian journalists as bait. That you're not in jail is an abomination

Arundhati Roy, however, is a different matter!

So far, Pakistan has not gotten anywhere with its ‘atrocities on Kashmiris’ propaganda as its main unit Hurriyat enjoys zero credibility in the international forums as it is widely seen as an Islamist movement out to drive out the minorities.  Just last night, Kashmiri Pandit colony was attacked by radical youths. The Kashmiri Pandit genocide and the involvement of many leading names from Kashmir in it only made matters worse for both Pakistan and Hurriyat propaganda. India’s growing clout also adds to the woes of Pakistan and its rants against India which are largely seen as its problem with a ‘secular’ nation whose majority population is not Muslim.

But then, even being a Muslim nation is no respite as its Muslim neighbors, Afghanistan and Iran, have routinely accused Pakistan of nurturing terrorists.

#NakaamLeague has pushed #Pakistan into quagmire; isolated Pak in world, Iran-Afghan & Saudi are India more friends than us. @BBhuttoZardari

In short, Pakistan is not at a level playing field as far as international diplomacy is concerned.  All thanks to its own doings! So what would it gain by inviting Arundhati Roy? Nothing much but it would certainly make the local population happy!

Thank you #India.
India wins hearts in #Afghanistan while some other countries export terrorists. #SalmaDam pic.twitter.com/UihfFIRmoM

And also due to constructive Indian policies:

With Indian media also highlighting the demands of Baloch and Sindhi freedom fighters, more is at stake for Pakistan than for India. If Arundhati Roy does get invited, then India may end up providing a stronger base for Baloch and Sindhi nationalists, which would hurt Pakistan even more.

But what about China?

China has raised the bar by indulging in Balochistan liberation talks. Pakistan believes that with China in the picture, India won’t do anything ‘adventurous,’ conveniently forgetting that it is India that China does not want to mess with in the South China Sea, and when India did not bother to appease the dragon on Tibet, by continuing to host Dalai Lama, then why would it care for its talks on Balochistan?

Even China is scared of Pakistan’s role in terrorism! Chinese police ordered low-end Chinese hotels to not allow Pakistani tourists to book a room in Guangzhou. Pakistan shared this honor with troubled states Syria, Turkey, Iraq, and Afghanistan. The development came on the heels of G20 summit in Hangzhou and was reported by the Chinese newspaper South China Morning Post.

In short, Pakistan should concentrate on its own minorities such as Hindus, Sikhs, and Christians who have been living under the sword since 1947 and sort out its problem in Balochistan and Sindh before it gets into ‘adventurism’ mode against India.

Baloch activists abducted by Punjabi army and their dead bodies dumped on the shores of Balochistan coast, @amnesty pic.twitter.com/gdYrUvMOuE

China may be an enemy for India on many aspects, but it is unlikely to make a 100% enemy out of it. In any case, didn’t the radical Chinese newspaper The Global Times called India the ‘Golden Boy of the West.’

Syed Ali Geelani is a puppet of Pakistan: Baloch activist