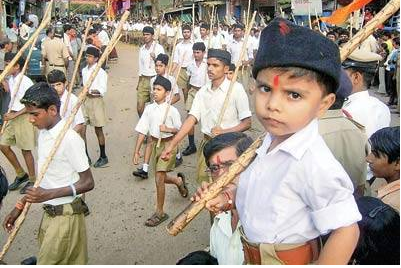 By this time, many of the readers would have got the news that the new uniform for RSS workers is the humble brown trouser and not the knickers anymore. Many must have also read the news that RSS is backing women’s right to enter Temples.

The decision to shun the knickers was taken at the annual meeting of the Akhil Bhartiya Pratinidhi Sabha at Rajasthan’s Nagaur.

But why this decision and why now?

RSS general secretary Bhaiyyaji Joshi said that it was taken to attract the country’s youth. In his own words: “Trousers are more common in normal life. We are the people who move with times. So we had no hesitation to change dress code.”

It seems RSS is now going for a major image makeover what with it also backing Feminist movements like entry into Temples and it is likely to get the attention of the younger generation which would be more receptive to it after these changes.

Calling for a change in the mentality of the Temple managements, RSS called the restriction on the women’s entry unfair!

RSS general secretary Suresh Bhayyaji Joshi in a press interaction said that “because of some unfair traditions… at certain places there has been a lack of consensus on the question of temple entry. Such sensitive issues should be resolved through discussion and dialogue and not through agitations at a press conference.”

This flexibility is what that endears common Indians to the RSS and it is due to this that it has been able to gain such vast following.

The detractors today may claim that RSS is similar to ISIS but nothing can be farther to the truth as the most persecuted minority, the Yazidis, have placed their faith in this organization. Now what better rebuttal is there than this endorsement by a minority that is facing total annihilation in the Middle East because it follows a different religion?

Then RSS’ social work in times of tragedies, be it the Chennai flood or the Assam flood, has made it a visible entity and people do not hesitate to take help from this organization.

RSS has repeatedly vowed that it stands for unity and holds nothing against the minorities. In the infamous Charkhi-Dadri mid-air collision, which happened over the New Delhi airspace on 12th November, 1996, the organization came out in full force to help the victims, mostly Muslims.

This collision killed 350 people when the Kazakhstan airlines Illyushin-76 jet and a Saudi Arabian airlines Boeing 747 jet crashed in the fields of Charkhi-Dadri, two small villages in Haryana, India.

The victims were indeed thankful to the organization, and the acts like these help this organization spread its wings further, win over detractors and gain fresh blood generations after generations.

For now, with these two moves, it certainly has proved that it knows how to go with the times.