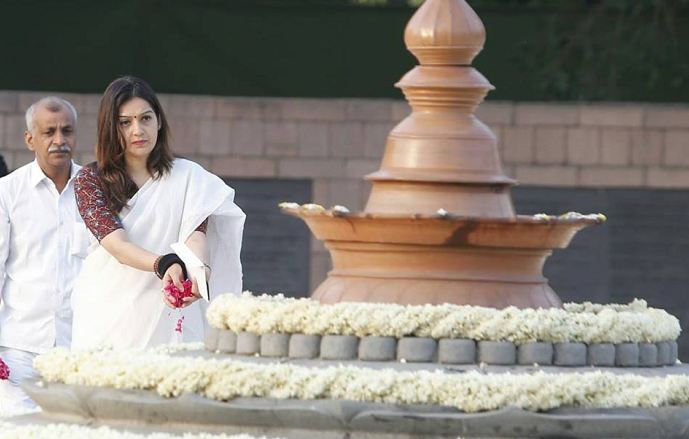 Priyanka Chaturvedi who has been the target of extreme trolling and rape threats today pondered over the entire episode.

Priyanka Chaturvedi is the National Spokesperson of Congress believes that people who use the images of Lord Ram and Lord Hanuman to attack women do a great disservice to Dharma.

Police had yesterday arrested a Twitter user, Girish Maheshwari, age 36 years, for issuing rape threat to the minor daughter of Priyanka Chaturvedi. Girish is a resident of Mumbai but was arrested from Ahmedabad by a joint team of Mumbai and Delhi Police.

The arrest came within two days after the Union Home Ministry directed the Mumbai police to file a case against the person and also asked Twitter to prove details of the account user @GirishK1605 for issuing rape threat.

Here is what Priyanka Chaturvedi wrote:

If I see it personally then the accused, who was a nameless, faceless twitter handle till recently and who used that very anonymity to threaten me and my family has been booked and will eventually be punished is a development that should conclude and settle it for me.

I fought this with the backing of immense public support and rock-solid family that gave me the strength to fight. However, should this end here? No. This fight for our collective space and right to say what we want to is much bigger. A democracy only thrives when we discuss and debate through continued dialogue.

In the larger scheme of things, the accused in this incident is just a cog in the wheel of a much larger hate spewing, organised machinery. This targeted trolling has become an official political tool of a dominant ideology being pushed today. It is this corrupt means to silence anyone opposed to you through vile abuse and violent threats that need to be exposed and broken. The political patronage that such people receive has been clearly exposed time and again, the government’s reluctance to rein in a monster they have created is evidence enough of their complicity. This organised menace needs to be tackled by all sections of the political spectrum. This fig leaf of an excuse that if you can’t stand the heat, get out of the kitchen needs to be thrown into the bin, a place it duly deserves to be in. Why should we not expect more accountability from those in power? Why should the government not break its silence? Why should the government be allowed to pass the buck?

Rajiv Gandhi remembered on his birth anniversary for the wrong reason!

This is a first instance that comes to my mind in which a public troll who directed hate and threat on social media has been taken to task and the police has followed up with speed, right intent and the seriousness that it truly deserves.

The sad reality though is that the fake quote attributed to me that implied the party and I stand for the accused of Mandsaur gang rape continues to be viral on Facebook and WhatsApp, it continues to trigger hateful, vile abuse and call for violence being directed at me. Let’s not forget we live in times where fake quotes, forwards, news on social media platforms has led to several hate crimes and made mob lynching rampant. These viral fake stories have got people take law into their own hands.

This arrest is a step in the right direction and should be taken further
– so as to investigate the larger nexus,
– so as to expose those who allow this kind of discourse to prevail with impunity, – so as to dismantle the hate machinery which is causing unrest and hate across the society.

To end on a positive note if evil exists in society there is greater goodness that prevails. Lord Ram and Lord Hanuman burnt down the kingdom of Lanka for a woman’s honour, today their image and their name is being used to abuse women at large, this I truly believe is the greatest disservice to the Hindu Dharma.

The post is by Priyanka Chaturvedi, only little editing has been done for swifter reading.