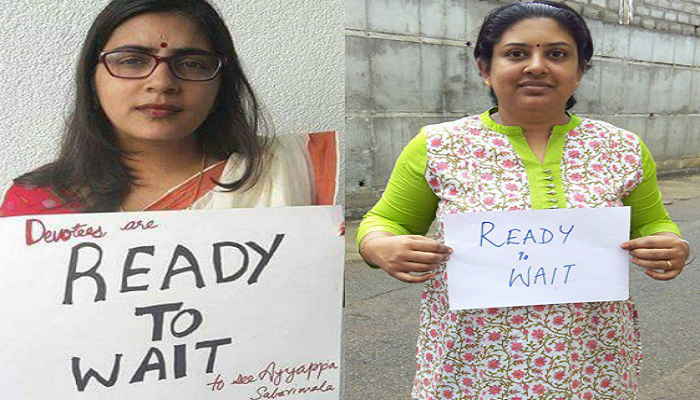 For the love of Lord Ayyappa the Hindu women have launched a campaign called ‘#ReadytoWait.’

The campaign #ReadytoWait is spearheaded by a Hindu woman Anjali George who believes, in her own words:

‘As to whether women devotees between the age of 10 and 50 should be allowed entry, should ideally be arrived at by deliberation among concerned Hindus who are devotees of Ayyappa, including the women devotees. Hindus should not permit others to hijack the debate.’

This argument truly makes sense as when the matters of faith are concerned, it is the faithful who must be asked. Sounds fair?

Hinduism is different from other religions, every Temple has a story, a unique one at that, behind it.

For example, Swami Ayyapa never married and that is why Hindu women, traditionally did not go to his abode till they were into their menstrual cycle. In short, it is all about traditions and not about discrimination and that is what #ReadytoWait is trying to convey.

#ReadytoWait challenges the charge against Lord Ayappa of being a misogynist

Lord Ayyappa killed a demoness called Mahishi as he was destined to do so since she was under a curse. Mahishi returned to her true form of a beautiful lady Malikapurathamma. She desired to marry the Lord but he said that he will marry her the day when there will be no more pilgrims coming to see him. It was his way to turn down the request politely but this was accepted by Malikapurathamma and she still awaits. For the pilgrims who visit Sabarimala paying respects to Malikapurathamma, a female in love, is as important as is going to Sabarimala.

However, since many among the Hindus this fact is not well-known therefore out of ignorance they believe that the menstrual women are being discriminated at the Sabarimala while it is clear that this has more to do with individual temple and its deity’s own history than any taboos put by ‘Hinduism.’  In short, the team of #ReadytoWait  must be heard not with suspicion but with an open mind.

#ReadytoWait  is actually about stopping the standardization of faith

Should we all believe that God is one? Should we all believe that he is a formless man? That he never takes avatar? The fact is that while all religions may teach the path to god, yet all the paths and practices towards reaching him are different. Hinduism is perhaps the most different of the current lot with Goddesses being accorded the highest stature which makes it unique.

The concept of Ardhnarishwar is unique to Hinduism, which cannot be found in other later founded faiths and so on. Also the fact that Hinduism does not have a founder or one book that one can subscribe to, different regions have their own ways to worship the Supreme. Now people may dislike all of this and give it any color, but that is what makes Hinduism ‘different!’

Hindus have different ways to worship Gods and Goddesses, the way Goddess Sharda is worshipped in Kashmir is different from how she is worshipped in West Bengal and Hinduism respects that. If Hindus have Goddess Mahakali, the supreme destroyer, then they also have Mata Annapurna, the one who creates food which sustains mind, body, and soul and helps sustain the earth.

These are simple points that everyone should remember and not try to grade Hinduism. Essentially Hinduism is a way of life, that is why non-Temple going Hindus or non-fasting Hindus are not seen with disdain and are not discriminated against by the society. All that the #ReadytoWait, to our understanding, is about is the celebration of ‘being different’ from the rest.

P.S.: #ReadytoWait has been launched by women who have no connection with any political party. This truly makes #ReadytoWait different!