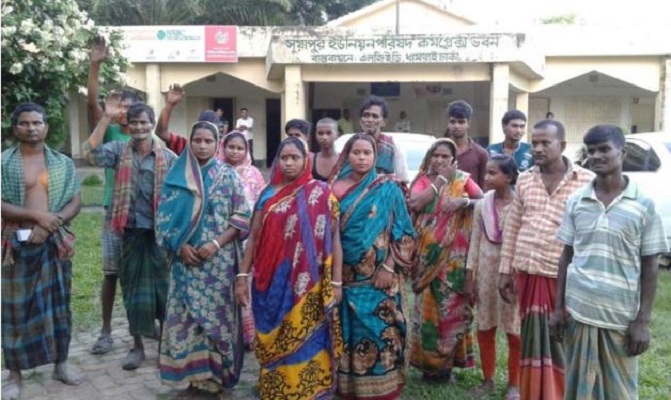 A warning has been issued by a popular radical Muslim organization Hefajat-e-Islam to the India-friendly government of Bangladesh.

In the warning, it has said that if the idol of Greek Goddess won’t get removed as soon as possible then it will work to remove Hindus from Bangladesh. Bangladeshi Hefajati Islam, Brahmanbaria branch, made this outrageous statement today. This area is notorious for Hindu persecution and last year saw violent attacks on the Hindus that drew international condemnation.The group said that the Bangladesh government is acting like a province of India and that they are prepared to fight Indian Hindus for this.

The news dated April 20, 2017, has been carried in the Bangla daily Sangbadpratidin and has been covered by another daily India.com which www.currentriggers.com translated for the benefit of the readers.

Currentriggers.com also reached out to a human rights activist for his comments on this development. On the condition of anonymity, he said that the situation of minorities, especially, the Hindus is very fragile and these threats can become real at any time.  He also opined that these hate speeches do not earn prosecution which aids these groups to keep issuing threats. Recently, Bangladesh Prime Minister Sheikh Hasina had visited India but the latter did not raise the issue of attacks on the Hindu community in the neighboring country. The continued exodus of Hindus from the country due to persecution have also created problems in India’s border states such as Assam and Tripura.

Dr Abdul Barkat, a scholar in Bangladesh had recently said that there will not be any Hindu left in the nation after 3 decades.

Barkat had even said that from 1964 to 2013, around 11.3 million Hindus migrated out of Bangladesh due to religious persecution and discrimination.

While all this is going on, the Dhaka University fired a man named Zakir Hossain who was a class-IV employee and who hurt Hindus by serving beef Tehari to Hindu students. He did this on Pahela Baishakh when many people gathered on the campus to celebrate the Bengali New Year a few days back.

Zakir later admitted, as per leading newspaper bdnews24.com, that he made Tehari with beef at the instructions of Bangladesh Chhatra League leader ‘Sohag,’ and others. This dish was later served to Hindu students and others and after the matter came to light an outcry occurred leading to the action against Zakir. But feeding beef to students or making beef dishes in Hindu Temples is not a new trend in this country.

Pic: Used for representation only

Currentriggers.com is an independent initiative, please help us spread the word by sharing, and do like our page for more such news.