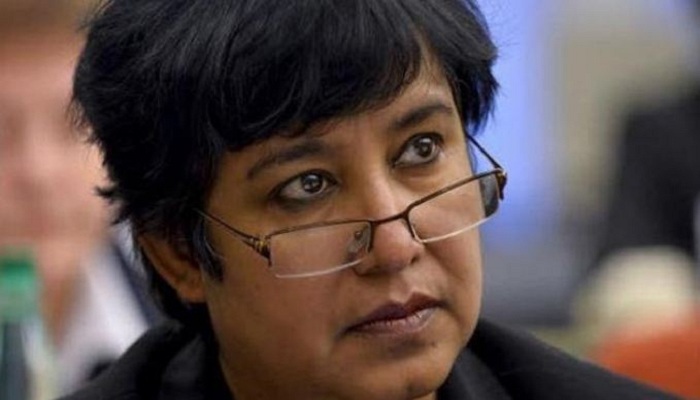 Taslima Nasreen, the writer in exile, has again stoked controversy after equating Indian who want to ban Pakistanis from the Indian soil with Hitler. She went a little too further this time stating that those who want to ban them are somehow working on the Hitler’s idea of blood purity.

How Hitler can be used to denounce those who do not want Pakistani actors, is something that only Taslima Nasreen could explain but it does show that she wants an open door policy for anyone who wants to enter India. But why should India continue to host people who do not have the gumptions to denounce terrorism sponsored by Pakistan is a point that perhaps she does not want to understand.

And how is the Hitler idea of blood purity even valid in this entire context?

Taslima Nasreen is a loose cannon, eulogizing her beyond a point is detrimental to Indian interests

India gave Taslima Nasreen refuge when Bangladesh-based extremists wanted to eliminate her but what exactly has India gained by it ? This is a question that must be asked and the hospitality must be extended to those who at least try and earn their proud Indian stripe. By bringing Indians to the level of Hitler despite the hospitality shown to Afghans, Tibetans, Rohingyas, and other suffering groups, Taslima Nasreen has shown that she may end up doing more harm than good. The use of loose language against those who seek the ban and bringing Hitler in this exposes her limited understanding of India and her constant disdain for Indian hospitality. Even Tarek Fatah pinpointed to that politely, but Taslima Nasreen will fail to grasp it:

Needless to say, at present Taslima Nasreen is getting a lot of angry messages and she was quick to dub them as ‘hate messages.’ But she had almost nothing to say on why she herself used the hate speech against the Indians. She must understand that just like she wants to enjoy her right to freedom of speech, then so does those Indians who do not want Pakistani artists in India or see them in ‘their’ nation’s industry. If she still chooses to speak against them, then everyone has a right to protest against her. This is a democracy where people speak up their mind even though they may not be eminent intellectuals like Taslima, but will she understand it? Unlikely.