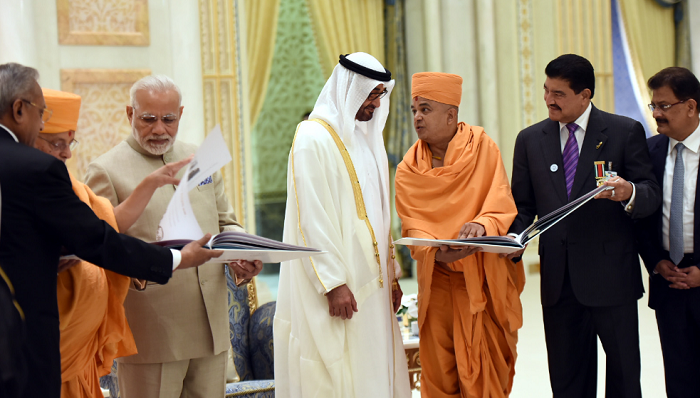 The fake news mania may end up doing more harm as a major Middle East newspaper the Gulfnews.com has taken note of the viral video spread far and wide in India at a time when Prime Minister Narendra Modi is touring Palestine, United Arab Emirates and Oman.

The fake news, in this case, is a video posted by major news outlets claiming that the Sheikh Mohamed bin Zayed Al Nahyan,  Crown Prince of Abu Dhabi and the Deputy Supreme Commander of the UAE Armed Forces, had chanted a Hindu prayer greeting, ‘Jai Siya Ram’ at a ceremony organized by a Hindu group. The Gulf News has noted that this was obnoxious but a ‘carefully designed attempt by some groups to spread false propaganda and gain political mileage in India.’

So who is the person in the video?

Gulf News has said that the person is Sultan Sooud Al Qassemi who is a UAE-based columnist and commentator on Arab affairs.

In a scathing report on the fake news being put out by two major Indian news channels and covered by countless domestic newspapers, the Gulf News has written that the Indian mainstream media is falling prey to propaganda and fake news and worse noted that this was done ‘by choice or as acts of commission.’

And then also states that these viral videos ‘show a clear pattern’ as all the stories such as this, were uploaded between a similar time frame; just ahead of the Indian Prime Minister Narendra Modi’s arrival in the UAE.

The clear-cut report highlights the ugliness of the fake news at a time when Prime Minister Narendra Modi has just visited Abu Dhabi and saw the ‘groundbreaking ceremony’ of the first ever Hindu Temple there. Hindus from India make up for a significant workforce and the Middle East in the Muslim majority. But of late, India has come much closer to the Gulf nations through sheer willpower and single-mindedness of the Indian Prime Minister who has invested time and energy to build the once on and off relations.

To check the full content posted by the Gulf News busting this fake news, you can click here.

We had earlier explained the significance of Narendra Modi’s initiatives and how it is winning against a radicalized Pakistan.

Hindu nationalist government of India is winning against Jinnah’s Pakistan