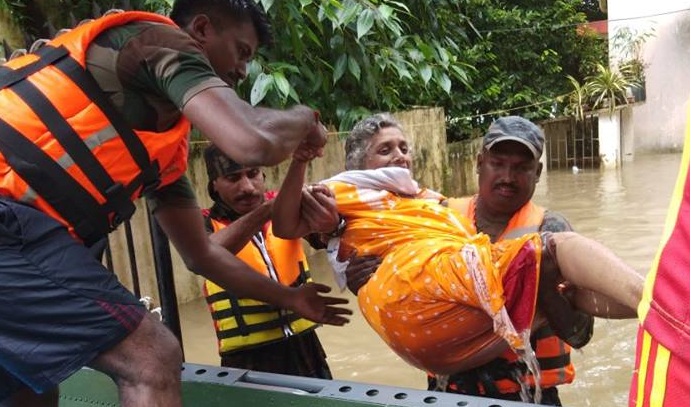 Floods in Kerala have again tested human resolve in the face of a crisis.

So what has been the role of the Centre in this crisis in Kerala? What has it done till now? Here is a lowdown:

During the recent floods in Kerala, the Centre has provided urgent aid and relief material in a timely manner and without any reservation to the State. The situation has been regularly monitored by the Prime Minister Narendra Modi on daily basis and he visited the State on August 17-18, 2018.

On his instructions, the National Crisis Management Committee (NCMC), under the Chairmanship of the Cabinet Secretary, regularly monitored and coordinated rescue and relief operations by holding daily meetings from Aug 16-21, 2018. Senior officers of Defence Services, NDRF, NDMA and Secretaries of Civilian Ministries attended these meetings. Kerala Chief Secretary participated in these discussions through video conference.

Following the decisions taken during these meetings, Centre launched massive rescue and relief operations in Kerala. In one of the largest rescue operations, 40 helicopters, 31 aircraft, 182 teams for rescue, 18 Medical Teams of Defence forces, 58 teams of NDRF, 7 companies of CAPFs were pressed into service along with over 500 boats and necessary rescue equipments.

They successfully saved over 60,000 human lives by rescuing them from marooned areas and shifting them to relief camps.

Defence aircrafts and helicopters have made 1,084 sorties of duration 1,168 flying hours and airlifted 1,286 tonne of load and carried 3,332 rescuers. In addition, a number of Navy and Coast Guard ships were pressed into service to carry relief material to Kerala. The search and rescue operations and mobilisation of resources alone would cost the Central Government hundreds of crore of rupees.

As per the guidelines, Central Government provides its allocation to SDRF of each State in advance in two installments. In case of any natural calamity, State meets the expenditure of relief and rescue from the SDRF already available at its disposal. In case of any natural calamity beyond the coping capacity of a State, the concerned State Government submits a detailed memorandum indicating the sector-wise details of damages and requirement of funds for relief operations of immediate nature. On receipt of a memorandum, an Inter-Ministerial Central Team (IMCT) is deputed by the Central Government for on-the-spot assessment of damages and additional requirement of funds. The report of IMCT is considered by the Sub-Committee of National Executive Committee (SC-NEC) headed by the Union Home Secretary in conformity with the norms and then by a High Level Committee (HLC), chaired by the Union Home Minister for approving the quantum of additional assistance from the NDRF.

In the case of recent floods and landslides in Kerala, an interim memorandum was submitted by the State on 21st July, 2018 and immediately an IMCT was constituted, which visited the State on 7th to 12th August, 2018 for on-the-spot assessment of the damages. Union Minister of State for Home Affairs, Kiren Rijiju visited Kerala on July 21, 2018 followed by the Union Home Minister Rajnath Singh on 12th August. Since there was a second spell of floods in Kerala, the State Government has stated that they will submit an additional memorandum on the fresh damages caused by the floods and landslides once rescue efforts are over.

Since submission of additional memorandum by the State will take time, with a view to assist the State in meeting relief and rescue expenditure, the Central Government has released Rs.600 crore in advance pending assessment by IMCT and decision of the High Level Committee. This is in addition to Rs.562.45 crore already made available in SDRF of the State. In addition to the financial support, Centre has made available large quantities of emergency food, water, medicines and other essential supplies, including additional allocation of foodgrains, as requested by the State. In supplying these materials, normal rules and procedure have been set aside in view of emergency nature of the requirement in Kerala. In addition, after the visit of the Prime Minister, a number of measures have been announced from different schemes of Central government such as ex-gratia payments from PM’s National Relief Funds (PMNRF); building of damaged houses under Pradhan Mantri Awas Yojana (PMAY); additional 5.5 Cr. person days under Mahatma Gandhi National Rural Employment Guarantee Scheme (MGNREGS); national agencies such as NHAI, NTPC and PGCIL to assist the State in repairing National Highways and restoring power etc.

The Rs.600 crore released by Centre is the advance assistance only. Additional funds would be released from NDRF on assessment of the damages as per laid down procedure.